There are many apps out there that focus on sharing music, and now an app called Soundtracking has seemingly pulled the best parts from social networks and music sharing into one app. Soundtracking is an iOS and Android app that brings together picture sharing  like Instagram, music tagging/discovery like Shazam, and location sharing features like those of FourSquare into one app so that users can “share the soundtrack of their lives.”

Since this app centers around music sharing, users must first identify a song with the app, either Shazam style via the microphone, or by playing a song on the device. After the song is identified, users can then add a picture and location data, as well as quotes and hashtags. All of these things are rolled into one sleek-looking post, with the Album art at the center. Users can then click on the album art to instantly play the song. Facebook, Twitter and Foursquare sharing are also integrated. Users can like and comment on each others activity, as well checking out what’s trending nearby and other users who have liked the song as well.

Some other features include the ability to listen to shared music via YouTube directly in the Soundtracking app, and a home and lock screen widget. The app has built-in support for Spotify and Rdio as well, and the ability to un-like tracks and posts.

Soundtracking is hands down one of the best social networking/streaming music apps I have ever used.The only problem right now, though, is that not many of my friends are using it yet. But with an expansive feature set and smooth interface, I doubt it will be long before we can dedicate songs to our friends with a finger press.

So if you’re a fan of sharing music and are tired of posting YouTube URL’s into Facebook, check out this app for an easier and fun way to share music.

Check it out at the Google Play Store or on iTunes. 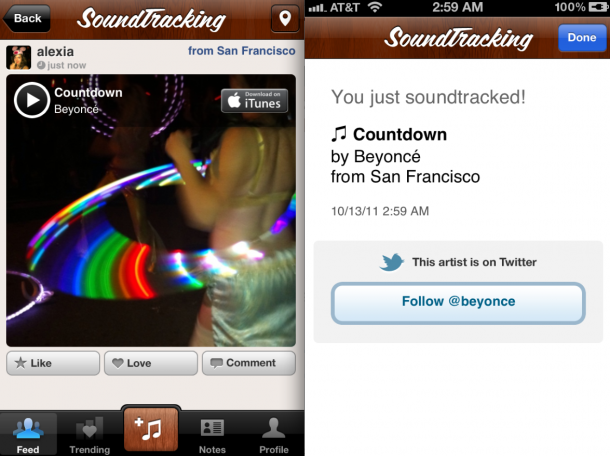 You might have seen the Samsung Galaxy Note II ad where a startup recently launched a new game called Unicorn...