Google announced yesterday that it would be shutting down their Google Reader service, the denizens of the internet were shocked, to say the least. How are we going to get our news? What about our years of feed customization? Well folks, I’m here to help you tell Google to talk to the hand. Feedly is a great alternative to Google Reader, and prettier to boot. And the company is ready for the Reader shutdown by releasing Normandy, a clone of the Google Reader API that will allow users to seamlessly port their Reader feed into Feedly.

Feedly works like most RSS aggregators, and even imports your Google Reader feeds directly into the service. Users can use the traditional browser interface, or download an Android or iOS app. Where Feedly shines, though, is its presentation. No matter which device you use to interface with Feedly, content has never looked so aesthetically pleasing. Users can pick how the interface is laid out, offering views such as magazine, timeline, mosaic and cards.

So don’t worry about that silly petition to stop Google from shutting down Reader. Feedly’s put together a step by step description of how to transition to their service from Google Reader, which follows below the pictures. So visit them on the web and download the Feedly app for Android or iOS and put your mind at ease. 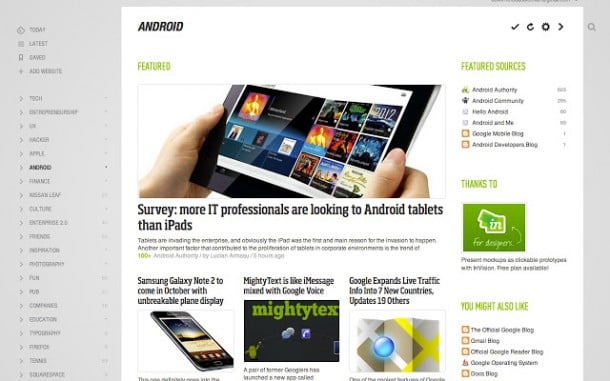 Transitioning from Google Reader to feedly

Google announced today that they will be shutting down Google Reader. This is something we have been expecting for some time: We have been working on a project called Normandy which is a feedly clone of the Google Reader API – running on Google App Engine. When Google Reader shuts down, feedly will seamlessly transition to the Normandy back end. So if you are a Google Reader user and using feedly, you are covered: the transition will be seamless.

If you are a Google Reader, give feedly a try before July 1st, and you will be able to migrate seamlesly:
Feedly for iOS
Feedly for Android
Feedly for Chrome
Feedly for Firefox
Feedly for Safari

Note 1: if you are migrating from Google Reader to feedly, here are some tips on how to personalize feedly to better match your existing workflows. If you have any feature request please add it on our feature request page.

Note 2: if you are a third party developer using the Google Reader API and would like to integrate with Normandy, please send an email to remi@feedly.com. We would love to keep the Google Reader ecosystem alive.

According to a report in the Wall Street Journal, Google is breaking apart its mapping and commerce divisions, both of...