Along with the several other products announced at today’s press event, the Samsung Galaxy S 4 is set to receive five new color options in the future.

The new colors include: 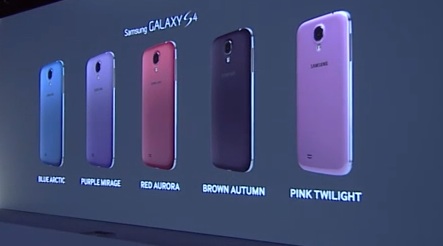 Samsung previously announced the availability of the Red Aurora version of the Galaxy S 4 for AT&T recently, with no news as to where the four new color options will be going or if they will be exclusively offered at specific carriers.

Last year, AT&T did receive a Garnet Red version of the Galaxy S III and Verizon received the Amber Brown and Sapphire Black versions, so we wouldn’t be surprised if we see the new options pop up in the near future.

Samsung has just unveiled a new convertible tablet called the ATIV Q, which will have the ability to run Windows...