While U.S. Samsung Galaxy S4 owners received a Qualcomm Snapdragon SoC in their handsets, some global variants of the device were released with Samsung’s octa-core Exynos 5 Octa SoC. Samsung took to Twitter today to announce an upgrade to their Exynos processors, claiming, “a new Exynos 5 Octa is coming next week!” While we are not sure what improvements have been made to the octa-core processor, Samsung claims that it will be “more powerful” and “enhanced” than the older version.

Samsung will launch a Twitter giveaway to celebrate the birth of its newest processor, which will take place once the new Exynos 5 is officially announced. The giveaway will result in winners receiving brand new Exynos powered devices.

Follow #ExynosEvolved on Twitter to receive breaking news about the new chipset, as well as details to enter the giveaway once it is announced next week.

We’ll be following this one closely, so check back with us as the story unfolds. 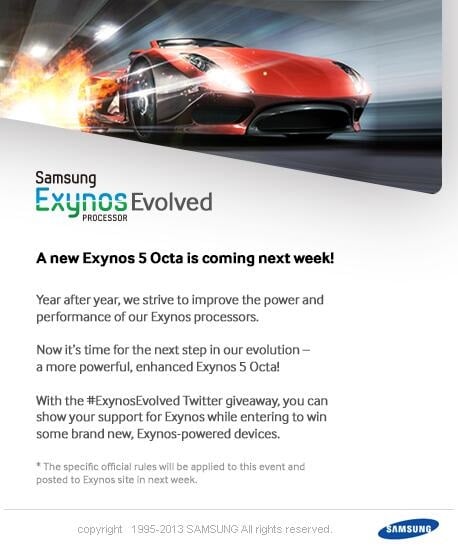