Motorola finally took the wraps off of its Moto X flagship smartphone yesterday, receiving both accolades and criticism from fans and analysts. Now that we have the official spec sheet for the device, we take a look at how Motorola’s Moto X stacks up against the Verizon exclusive Droid family.

So how does the Moto X hold up against the Droid Ultra, Maxx and Mini? Let’s find out. 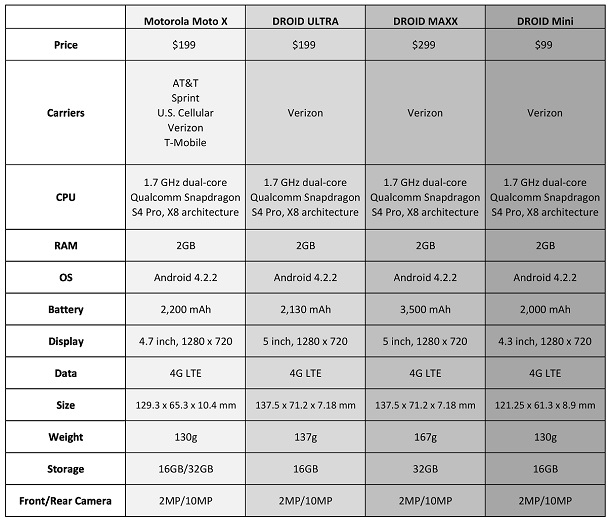 As you can see from the spec comparison chart above, there’s not a whole lot that separates the Moto X from its Droid brethren. All devices sport Motorola’s new X8 architecture, which run a dual-core Qualcomm Snapdragon S4 Pro clocked at 1.7GHz. Both the Droid family and the Moto X run on Android 4.2.2 and have 2GB of RAM and 2MP front facing cameras as well as 10MP rear-facing cameras.

Where the Moto X differs from the new Droids is clearly in the design department, with the Droid Ultra, Maxx and Mini rocking Kevlar backs and a flat back. The Moto X however has a curved back and comes in a variety of different colors (available only on AT&T at the moment.) The Moto X’s 4.7 inch screen is just a tad bit smaller than the 5 inchers that the Droid Ultra and Maxx have, and slightly bigger than the Droid Mini’s 4.3 inch screen.

With specs of these devices being very similar, the big differences between the four is design, size and carrier availability. The Moto X will be available on AT&T, Sprint, U.S. Cellular, Verizon and T-mobile, and the Droids are exclusive to Verizon.

Would you take the Moto X over the Droid Ultra, Maxx or Mini?