For gamers of a certain age, Konami’s Contra is burned into our brains. Whether we played it on the NES or in our local pizza parlor’s game room, the marriage of run and gun action with unforgiving difficulty proved to be the perfect combination to keep the sauce-covered quarters flying into arcade boxes and NES controllers being picked up again (after being thrown at the TV in frustration).

Contra is a classic and has spawned many sequels. Now the original game has been revamped for smart phones, redrawing the sprites and backgrounds, optimizing the gameplay for the touch screen, and adding in some modern features like new unlockable characters, leveling and (unfortunately) micro transaction purchases a la today’s “free to play” games. Contra Evolution has been available for iOS devices and recently game to Android too. You can grab it here: iTunes, Google Play.

If you played Contra as a kid, you’ll probably be pretty into this polished new version. The reworked levels looked great and the bosses in particular are very detailed. While they’ve been cleaned up and redrawn, the levels and the foes populating them stay true to the design of the original. The classic music’s been redone and is as much a thoughtful update to the 25-year-old game as the graphics. The whole package is great, and it will take you right back to the late 80s.

But Contra Evolution has some major flaws that might cripple a game without so much nostalgia around it. The touch screen controls can be clumsy and the constant appeals to buy power ups and continues with real money take away from the gameplay. These issues can be incredibly annoying, but don’t manage to spoil the game. 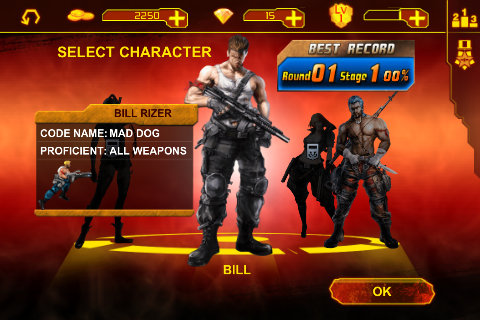 Contra Evolution starts you out with your choice of Bill Rizer or Lance Bean, the burly protagonists from the original. There are other unlockable characters who are grayed out in the selection screen until you accomplish certain goals. From the moment you start the game, it’s clear that it’s a faithful reboot. You drop into the familiar jungle, only with a fresh coat of paint, and a souped up version of the classic theme is pumping into your ear buds.

The gameplay remains the same too except for one change. The characters constantly auto fire their weapons. This makes sense with the translation to touch screen, cutting down on imprecise taps. Besides, Contra was always all about constantly mashing the fire button so it’s really just a thumb saver.

The touch screen control comes in 3 flavors, though all of them taste a little bitter. You can choose between a fixed thumbstick, movable thumbstick, and classic d-pad. The basic thumbstick seemed the best to me, if only because the virtual d-pad took up a third of the screen. Whichever stick you choose, the right of the screen features a large jump button that works well.

It really isn’t that bad, as touch screen controls go. But when the levels get more hectic, you just don’t have the kind of twitch control that you need. Also, it’s very hard to shoot diagonally at times, though I found I got the hang of it after a bit of play.

The control is best in the isometric, head on corridor levels which seem to better lend themselves to touch control since your movement is more limited. These became my favorite parts of the game for that very reason. Unfortunately the classic run and gun portions which are the meat and potatoes of the game suffer as they become more complex. 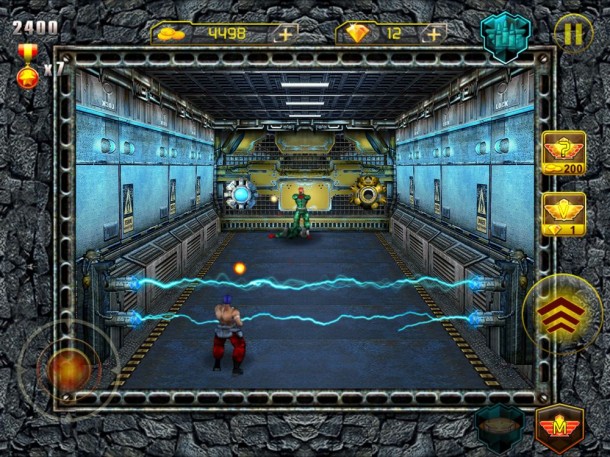 As I’ve said before, a Contra game should be a challenge. Difficulty’s a hallmark of the series. But when that difficulty comes from awkward controls it’s just aggravating. So far the game doesn’t have compatibility with any external gamepads, but it could benefit greatly.

Need a Power Up?

The micro transactions work similarly to several mobile games. There are 2 in-game currencies that you earn as you play, coins and diamonds. You can use these to buy power ups and, more often, continues. Once you’ve used these up, however, you’re prompted to purchase more with real money.

This doesn’t feel right in a Contra game, known for its steep difficulty curve. Being able to buy your way through the game neuters the challenge in a major way. Still, if you have the willpower to avoid the constant entreaties to buy power ups, you’ll play much like the old days – starting out with 5 fragile lives (you’ll still have more continues, though).

Contra Evolution is only a $0.99 download and it’s pretty darn fun despite its problems. If you want to run and gun on the go, this is great. If it’s a hardcore Contra experience you’re looking for, better pull that NES out of the laundry closet and get to it old-timer!

You can pick up Contra Evolution for 99 cents on both Google Play and iTunes!

AT&T has just announced the pricing and availablity of the highly-anticipated LG G2, and if you've been patiently awaiting its...