The Nexus 5 has been leaking like crazy lately, with a huge leak last Friday first spotted in Italy. We’ve got some more leaks for you on this sunny Monday morning, with a huge 7 minute video and some fresh pictures of the upcoming device.

Let’s start off with the leaked video. The device does claim the name Nexus 5 in the About phone section, but shows no clear Nexus branding on the back, meaning that the pictured Nexus 5 is a prototype model. It appears that an early version of Android 4.4 KitKat is running the show, as some UI improvements are missing when compared to KitKat leaks we saw last week. The Messaging app is still non-existent, adding more credence to the rumor of SMS/MMS being integrated into the Hangouts app.

As for today’s leaked images, nothing really new here, but some clean shots of the Nexus 5 nonetheless. Nexus branding is included on the matte black back, and we see the rumored KitKat notification bar. We also see the power and volume switches on the side of the device, as well as a charging port on the bottom.

So you good on Nexus 5 leaks? We’ll undoubtedly be seeing more as we get closer to the release of the device, date of which is still unknown. We’ve heard that Google would announce the Nexus 5 and Android 4.4 KitKat in October, so we shouldn’t have long to go now.

Check out the pics and video below! 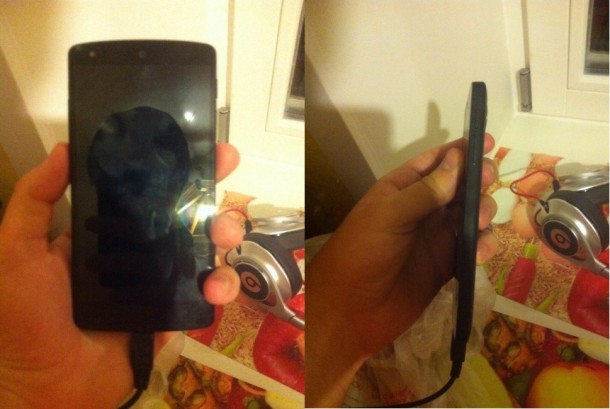