Cyber Monday. The name sounds way cooler than it actually is, like a robotic fight to the death or something, am I right? Well, we all know it’s the Black Friday of the online world, the day when crazy deals and bargains can be found through online retailers.

So, what’s the best deal to be had on Cyber Monday? An unlocked Moto X for $150 off, duh! Motorola is offering a $150 discount on any off-contract Moto X, including Moto Maker and Developer Editions. That brings the 16GB version of the device down to $350, and the 32GB version $400. Sound to good to be true? Pinch yourself, its real!

Supplies will be limited according to Motorola, so you better check Motorola’s site early on Monday of you wanna grab one of these bad boys. 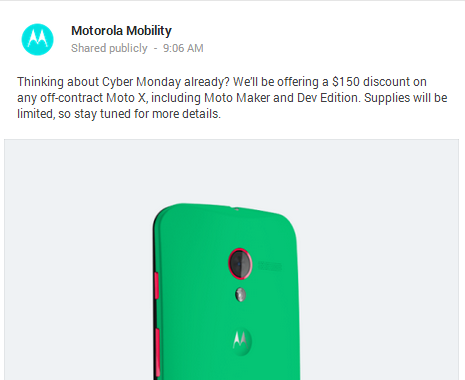 Sega Sonic Games are Only $1 from Samsung App Store!

Sega's blue blur, Sonic, has several games out now for Samsung devices. Many new and classic Sonic the Hedgehog titles...