Sega‘s been bringing its back-catalog to mobile, slowly but surely. One of its most classic titles finally made its way to the touch screen in a beautifully remastered update. Sonic the Hedgehog 2, possibly the pinnacle of 16-bit Sega, is out now for Android and iOS devices. If that’s not enough, the package includes lost levels that were meant for the original game!

This version of Sonic 2 isn’t a mere port. It’s been remastered and reformatted for our modern 16×9 touch screens. Instead of just looking stretched out to fit as often happens with classic ports, Sonic 2 looks as good as ever on my Galaxy S4. The classic 16-bit look remains, thankfully, but it does look like the pixel-count might have been slightly bumped up for mobile and the colors are definitely richer.

Even bigger than the technical improvements is the addition of extra content especially a long-lost zone that has been languishing, unfinished, in the Sega vaults for more than 20 years! The Hidden Palace Zone was intended to be a bonus zone for Sonic 2 that players could unlock if they collected all of the Chaos Emeralds. Unfortunately it was never finished and scrapped from the original Sega Genesis game. With this remastered version of the game, The Hidden Palace Zone finally sees the light of day! 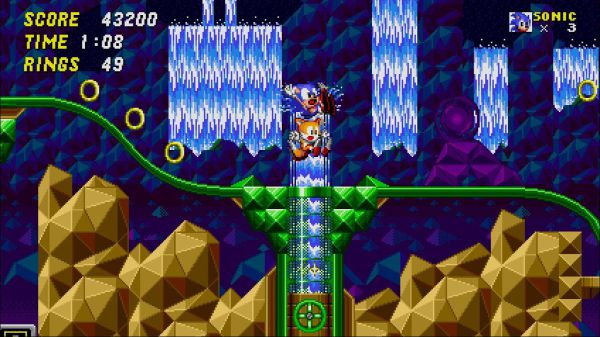 In your quest to conquer the Hidden Palace and all the other Sonic 2 goodness, you can also choose to play as a certain dreadlocked echidna. That’s right, Knuckles! You can choose to play as the classic combo of Sonic and Tails (with Tails offering minor help to Sonic from time to time), or as Knuckles, Tails, or Sonic alone. Playing as Tails changes the game up a little, since he can fly, but Knuckles gliding and wall-climbing almost makes it a new game entirely! This was the genius of Sonic & Knuckles’ backwards compatibility and it’s a nice addition to this package.

As far as gameplay, it works about as well as anything on a touch screen. I can’t say playing didn’t make me pine for the perfect feel of a 3-button Genesis controller in my hand but the touch screen d-pad was quite responsive and I found the game very playable. That might sound lukewarm, but it says a lot about Sega’s attention to detail. Touchscreen ports often feel like they’re slapped together and are a pain to use, Sonic 2’s controls are about as good as touch controls can get. 16-bit Sonic’s 1 button control style lends itself to mobile pretty well. The simpler the better!

Sonic 2 perfected the high-speed platforming formula that Sega introduced with the first game. It made the levels more complex with branching paths and more secrets. The already-tight inputs were tweaked just a bit, adding even greater control. On top of all that, the graphics were mind-blowing for the time, with 3d-ish effects in the main game and a full-3D third-person bonus round that elicited gasps from little gamers’ mouths when it first was reached (including mine).

Most importantly, Sonic 2 added the Spin Dash to Sonic’s simplistic control-scheme. While later games would over-complicate the blue blur’s perfect gameplay with homing attacks and such, the Spin Dash felt like the piece of the puzzle that had been missing. With the Spin Dash, Sonic no longer needed to struggle up slopes, or wait for a bounce to propel him along. The Spin Dash gave the Sonic gameplay formula exactly what it called for, more speed! If Sonic found himself in the doldrums after taking a hit or missing a jump, all he needs to do is bear down and let loose!

Sonic 2 is one of the best games of its generation and this port gets it all right, with surprisingly accurate controls. If you’re a fan of Sonic, retro-platformers, or anything that is pure and good you owe it to yourself to get this game!

This marks the first release of the much-loved Sonic game for Android devices. iOS gamers have had a port of the classic game for awhile now and will be getting all the added content in the latest update. Hopefully Sega will release things with more parity for the Android and iOS universes going forward. I’m pretty sure even the weakest Android device can handle the blast-processing!

Sonic 2 is a $2.99 download and worth every penny. You can grab it for Android devices at the Google Play store, or at iTunes for iOS. For all the details, check out the trailer and Sega’s announcement below:

One of the Greatest Games of All Time, Sonic The Hedgehog 2 Comes to Mobile Better Than Ever

Unveiling the rumored Hidden Palace Zone… restored in its entirety for the first time!

Sonic The Hedgehog 2 is back on mobile and better than ever with a fully revamped version of the adventure that first brought Sonic and Tails together. Sonic The Hedgehog 2 is available for the first time on Google Play bringing a new way for you to enjoy the classic game. This version is free as an update for fans that have already downloaded the game for iPhone, iPad and iPod Touch and new players can purchase the re-mastered version from the App Store.

Re-discover the high speed adrenaline rush through iconic zones such as Emerald Hill, Chemical Plant, and Casino Night. Spin, dash, and loop de loop with upgraded visuals and a silky smooth frame rate. Defeat deadly enemies as Sonic, Tails or Knuckles and experience brand new content in the challenging Boss Attack Mode where you can now try and beat all of the game’s bosses in a single run.

For the first time, you can finally discover the secrets of the much rumored and never-before-seen Hidden Palace Zone. This brand new level was never included in the original Genesis version of the game, and features new enemies, hazards, and an epic showdown with Dr. Eggman. This hidden zone is a forgotten treasure finally ready to be discovered on mobile.

Cover, the Android Lockscreen replacement application that adapts and learns from your habits is now available in the Google Play...