It’s by no means an official widget, but it works! Since the addition of SMS support to Google’s Hangouts messaging app, we’ve been begging and pleading for a widget for the app, so that we could see all of our messages by just glancing at our device’s homescreen. Thanks to XDA member RSenG2x, Hangouts users running Android 4.3 and up can utilize the widget. One thing though; the widget only lets you see new Hangouts at the moment, with more features coming in the future.

Aesthetically, the Widget resembles the Gmail widget, only with a green banner at the top instead of Gmail’s red. Hangouts messages are displayed with the sender’s name, time message was received and the message itself. 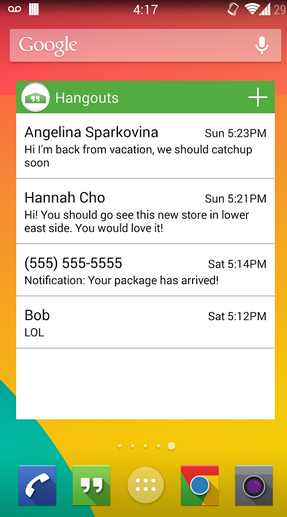 If you’re running Android 4.3 or up, head on over to the Google Play Store and give the Hangouts Widget a whirl. Just make sure you have the newest version of Hangouts installed before downloading the widget.

AT&T may be readying to add another tablet to its portfolio within the next few weeks. According to EVleaks, the...