Gold smartphones were all the rage in 2013, and the trend continues in 2014. LG is jumping in the gold smartphone game by blinging out the LG G2 with a nice gold-colored casing. It’s not quite as fancy as HTC’s 18K plated HTC One, but it’s a little more appealing than Apple’s faux-gold or champagne colored iPhone 5S.

The LG G2 is an amazing device, packing in some of the best components around. LG’s G2 has sold 3 million units as of December of 2013, not so bad considering that the LG G2 was unveiled in October of last year. The Gold LG G2 is only available in Taiwan at the moment, with no sign if or when LG would roll out a gold LG G2 to other markets around the globe. The price is consistent with the black and white models, coming in at around $496 for the 16GB model and $562 for the 32GB.

Hopefully, we see the gold LG G2 show up in the states and other markets around the world. We’ll keep you updated. 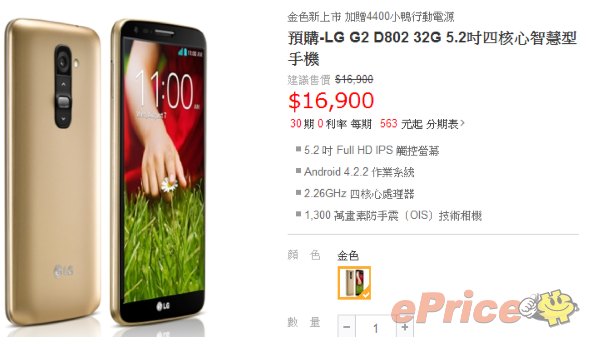 Acer unveiled a new low-cost tablet in China. Dubbed Acer Tab 7, it's an entry-level device with specs that won't...