We’re still picking up the slack from the IFA show in Berlin. Alcatel One Touch is one of those companies we failed to mention in the last few days; they used their German visit to unveil two interesting products, the Hero 2 phablet and Hero 8 tablet.

The first of the two is made to take on the likes of Note 4, boasting a 6-inch display with 1980 x 1080 pixels resolution and an octa-core chip clocked at 2GHz. There’s also 2GB of RAM, 16GB of internal storage, 3,100 mAh battery, 13-megapixel main camera with Optical Image Stabilization and auto-focus, and a 5-megapixel front-facing camera.

Beyond the device itself, Alcatel also announced a bunch of accessories that work with it, including the MagicFlip covers with LED lights, the Sidekick 2 which lets you to control your TV and music, a portable E-Card for ebook reading “with the comfort of paper” and the SmartBook, which we’ve covered before and which we want to see working with just about any smartphone on the planet, not just those made by Alcatel.

As for the Hero 8, it’s (obviously) the 8-inch tablet that comes with built-in LTE connectivity. This is also a very light device that has a weight of just 310 grams, making it lighter than Apple’s iPad mini. 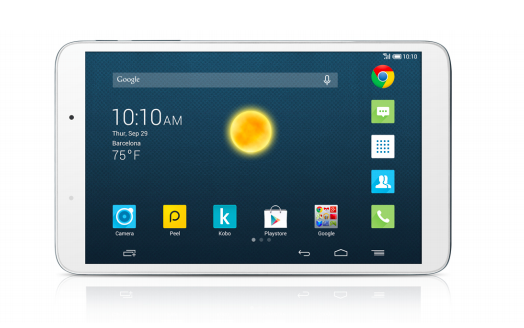 Specs wise, the Hero 8 boasts a borderless 1920 x 1200 display, 2GB of RAM, 16GB of internal storage, 4060 mAh battery, and a pair of cameras (5MP on the back + 2MP front-facing one). The device is also voice enabled, though we have hard time imagining anyone using Hero 8 as a phone.

The Alcatel One Touch Hero 2 will be available later this month though we yet have to hear how much it will cost. And the same goes for Hero 8…

Motorola waited until around midnight last night to release specific details of their new devices, the second gen Moto X,...