You’ve seen the “regular” Meizu MX4 and you may think it’s amazing. Think again; the Chinese company has another trick up its sleeve and it will “use it” very soon.

The MX4 won’t be the last device Meizu will launch this year; they are also preparing the MX4 Pro, which too will boast an octa-core chip as well as full 4GB of RAM. This, as far as we can tell has all the attributes to emerge as the very first Ubuntu Touch device. Or so we hope.

Anyhow, the rumored MX4 Pro will pack a 5.4-inch display with rather awkward 2560 x 1536 pixels resolution. Meizu is known for using uncommon screens and with MX4 they don’t want to change that tradition, which [tradition] obviously comes with a price tag. You see, it would be easier for the company to use a “regular” Quad HD panel, but they opted not to do it.

Unfortunately, we’re still clueless when will Meizu unveil its next flagship device and can only hope this will be a short wait. We’ll let you know as soon as we hear something new; stay tuned in the meantime… 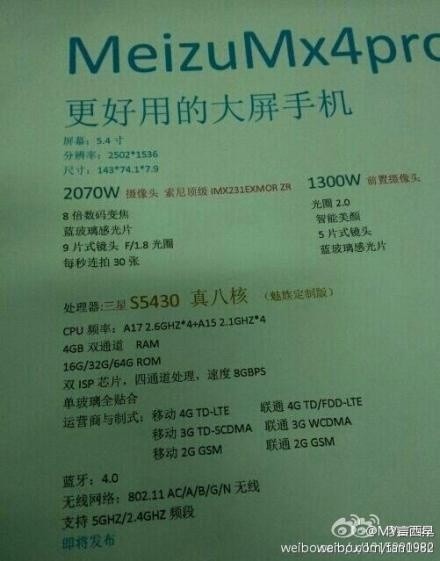 You may've missed it, but it's coming soon, joining its black, white and gold "brothers." I'm talking about the newly...