We’ve been seeing prototypes of flexible displays for years and years, but it’s only now that we’re beginning to see a small chunk of the technology make its way to real products today. Well, according to Dr. Ram-chan Woo, Head of LG Mobile Platform Planning, prototyping such devices isn’t the biggest drawback — manufacturing is. In order to create a device like LG’s latest handset, the LG G Flex, manufacturing centers need to be reworked, as there are new components that have only remained in testing facilities. Until now.

LG’s G Flex was officially announced in late October and not only features a flexible 6 inch OLED display, but also a self-healing back panel. Needless to say, LG’s latest smartphone seems much more interesting than that other curved smartphone we know of. In theory, at least.

The intrigue doesn’t stop with the G Flex’s display and back cover, though. The device also features a nice set of specs, including a Snapdragon 800 processor, 2GB RAM, 13 megapixel, and more. Still, do we need smartphones to be curved? Is it just a gimmick? In this review, we’ll put the LG G Flex to the test and find out just that, so read on!

As if having a curved and flexible display wasn't enough to get some attention, LG has packed in a handsome set of specifications into this innovative piece of hardware. From a practicality standpoint, the curved display on the G Flex contours to the face when on a call, but the company is also aiming for this to be a media device, offering a unique and immersive experience throughout.

Featuring a 6 inch 720p OLED display, the G Flex's screen resolution may be the only complaint that some will have. With such a large panel, it only seems right for a display to ship with a 1080p resolution, but at the end of the day, we didn't have an issue with the screen.

LG chose to give the G Flex such a large display for an optimal video viewing experience, likening it to watching a 55 inch curved television from 10 feet away. While it may not be the best analogy, we see what LG is trying to say, and it's a fitting claim. The large display on the G Flex is perfect for viewing movies and the curve makes the experience more cinematic. It's really something to behold.

Outside of the display, the G Flex shares a good chunk of the specifications found in the LG G2, including a 2.26GHz Qualcomm Snapdragon 800 processor, 2GB RAM, NFC, a huge (curved) 3,500 mAh battery, and more.

As you'd expect, the screen dominates the curved face of the G Flex. Above the display, you'll find the usual suspects: front-facing camera, proximity and ambient light sensors, notification LED, and ear piece. The left spine houses the micro SIM card slot, and the bottom is where you'll find the microUSB port, 3.5mm headphone jack, microphone, and an antenna for mobile TV (this is the Korean unit). On top, there's little to speak of, but you'll find a noise-cancelling microphone here.

Like the G2, most of the action is on the backside of the G Flex. Here you'll find the 13 megapixel camera and LED flash, along with the volume rocker, power button, IR Blaster, speaker grill and LG's logo. Of course, that's not all. The back of the G Flex is covered in a nano coating that can actually repair itself from normal wear and tear. Healing time is dependant on temperature, so you'll see results faster when the phone is in an area where the temperature is warmer and wait longer when it's in a colder environment.

When testing out the self-healing back on the G Flex, it was hard to photograph the initial scuffs when we ran keys over it a few times, but almost an hour later these marks were virtually invisible to the point where you needed to seek them out. 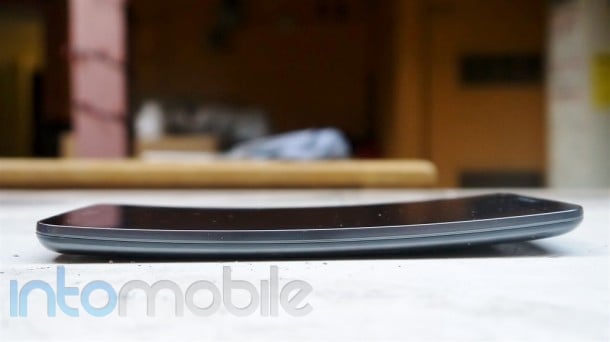 The design on the G Flex is obiously pretty unique, but we'd be lying if we said it didn't look like the Galaxy Nexus a bit -- Only bigger and with a more dramatic curvature. Nonetheless, the G Flex is a sleek device for its size.

Just like any 6 inch device, the G Flex feels pretty huge in the hand(s), but stays as compact as possible. It's shorter and more narrow than both the HTC One Max and Nokia Lumia 1520 despite having the same screen size.

Overall, the design of the G Flex is sleek and sexy. Continuing in the tradition of the G2, the volume rocker and power buttons on the back of the device will take some getting used to but features like Knock On will ensure an easy adjustment period.

A phone as interesting as the G Flex needs some decent software to back it up, and LG delivers in this area. While a majority of the software found on the handset is virtually identical to that of the G2, there are quite  few unique software tweaks specifically for the G Flex. 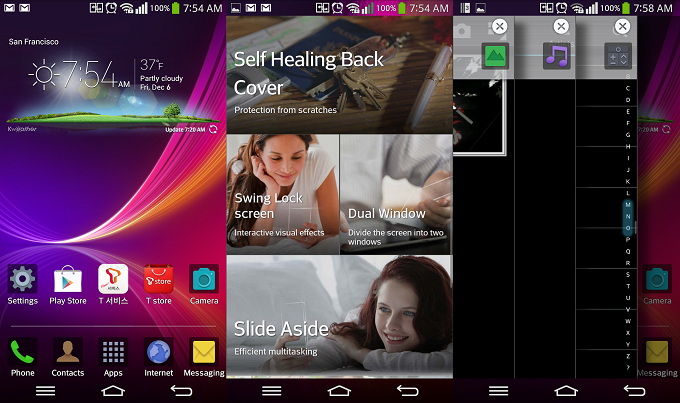 Running on top of Android 4.2.2, LG's customer user interface is one of our favorites. While LG has essentially thrown in more features than one will know what to do with, most are kept tucked away and out of sight until you need them. 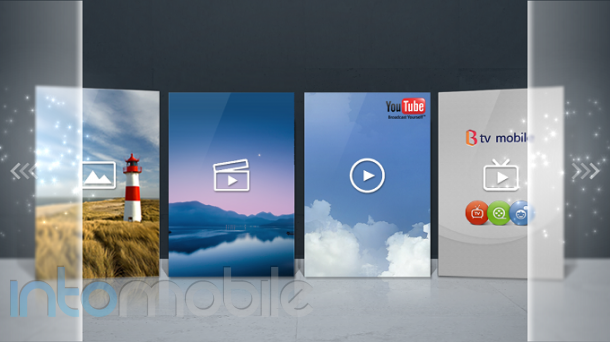 To give the G Flex a more 'cinematic feel', LG has a new feature for accessing your media directly from your lockscreen called QTheater. Users can access QTheater by dragging their fingers outward on the device on the lock screen. This will result in an effect that resembles a curtain being pulled back, revealing your photos, videos, and YouTube. Of course, there's also a dedicated application in the application drawer as well. 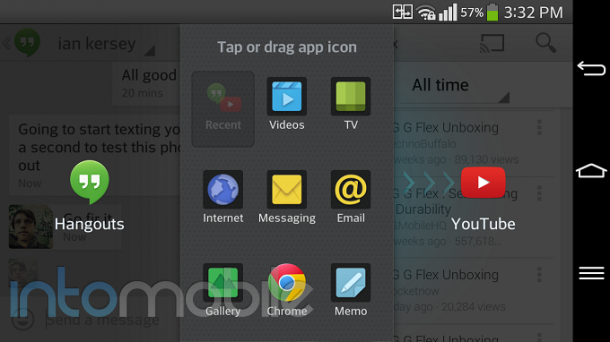 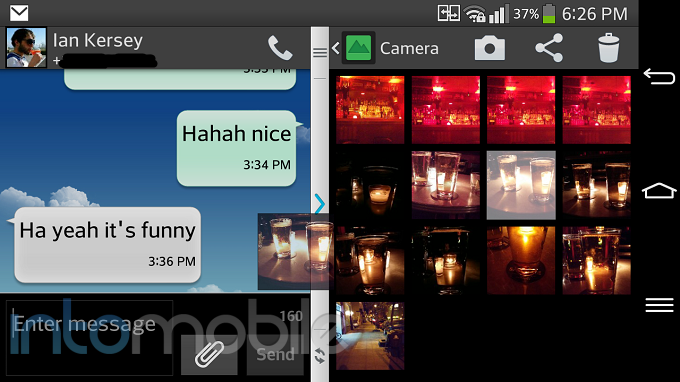 The Dual Window feature does exactly what it sounds like it does. The ability to have two applications running on the screen at the same time isn't anything new, but this implementation is new for LG. The feature comes in very handy, especially when doing something like sharing a photo from the gallery to the messaging application. It's as easy as dragging the photo you want to the other side of the screen and you're done. 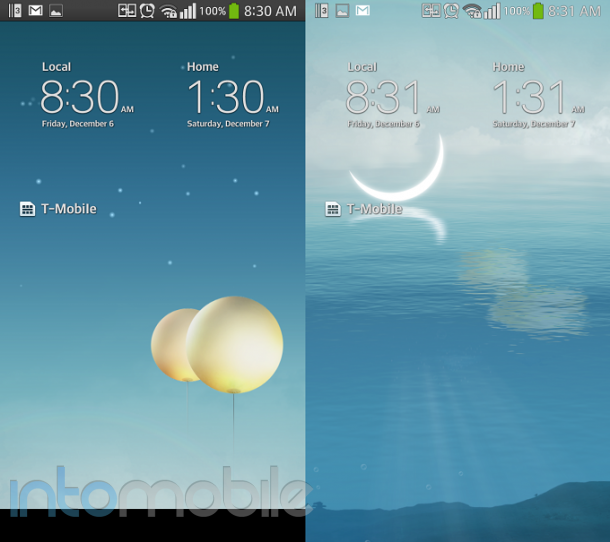 The G Flex's lockscreen is definitely interesting, even if it's nothing but visually appealing. The exact animated image itself shown on the lockscreen depends on what time it is, so in the evening you'll see the moon and stars at the top overlooking water and in the day time you'll see the sun shining in the bright sky. Easy enough. But when you tilt the phone back or towards you the image moves along too. From shooting stars above and bubbles coming from the sea bed below, Swing Lock Screen is strangely intriguing, even if it doesn't have any functional purpose. LG even goes a bit further by providing two different unlock effects depending on where you unlock the phone on your screen. 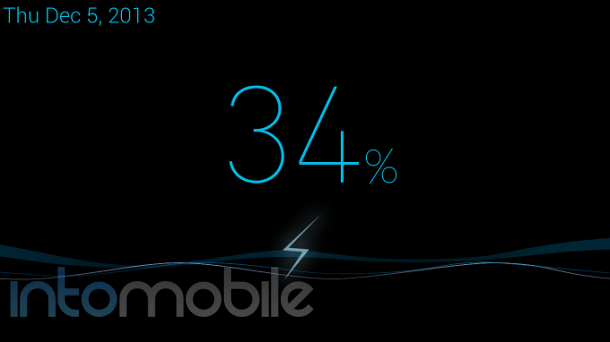 In addition to Swing Lock Screen, LG also added a new Daydream animation when charging you phone. It looks like it was taken directly from LG's older live wallpaper that showed liquid that rose and fell depending on the battery level. Now, this Daydream option is more simple and almost looks like sound waves. Again, simple, not necessarily functional, but still nice.

Usually, when you miss a call, the rear key on the back of the device will blink green. With Urgent Call Alert, if you miss several calls by the same number within a short amount of time, the rear key will begin to blink red. To signify the "urgency" the key will also blink faster than usual.

Overall, the new software tweaks are more than welcomed on the G Flex, but that's not all there is to it. All of the features that were introduced in the LG G2 are also present here as well, including KnockOn, Slide Aside, QMemo, and QSlide applications, as well as other cool features like Audio Zooming when recording video, Guest Mode, and Plug and Pop. 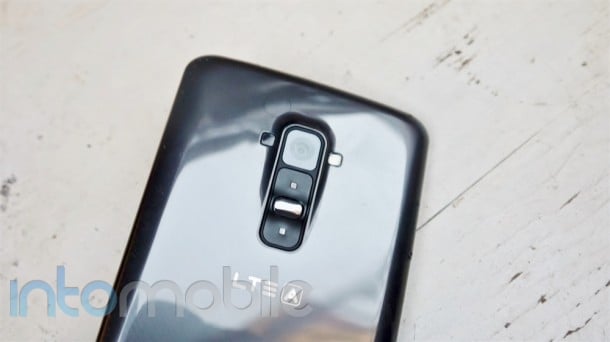 The 13 megapixel camera on the G Flex is capable of taking stunning photos. In perfect lighting conditions, colors are spot on for the most part with very little noise. Low-light performance can also produce decent shots as well but is a little more hit and miss than on a bright and sunny day.

The camera software on the G Flex offers up an array of features to get the photo you want. ISO, white balance, color effects, brightness and the other usual suspects can be found here, but there are also more than 12 shooting modes to choose from as well. Shot & Clear, HDR, Burst Shot, and Time Machine are just a few. 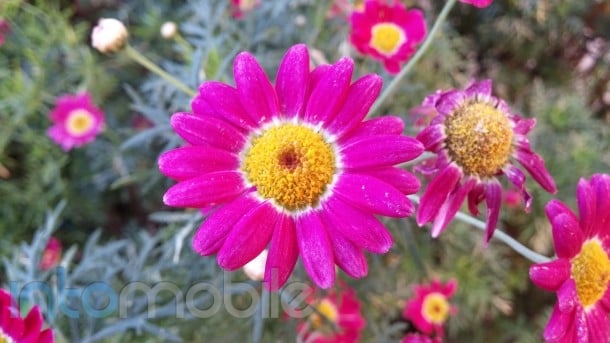 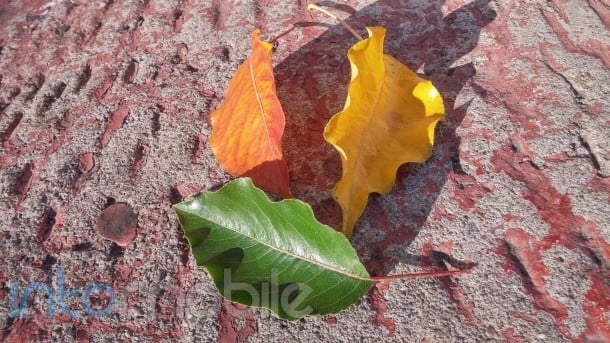 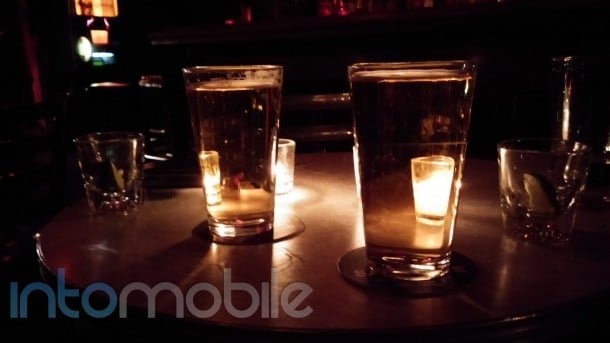 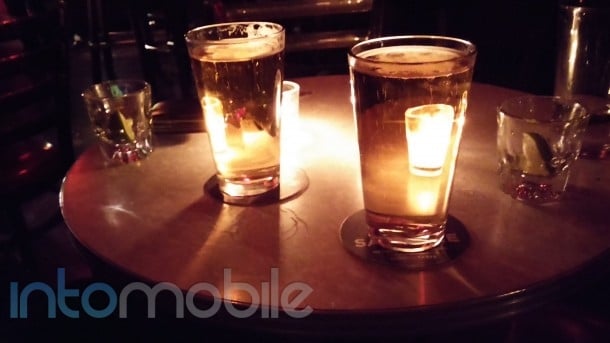 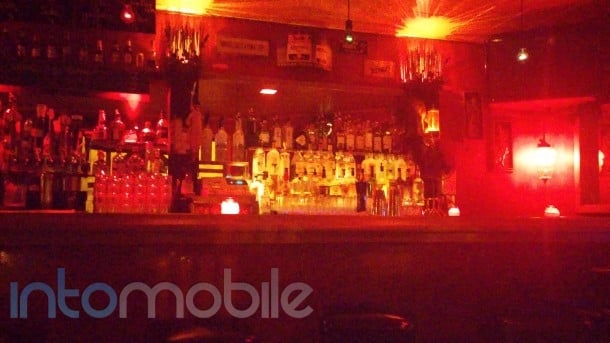 As you can tell from the photos, the camera on the G Flex can perform very well in low-light (first two photos) and not so great at times as well.

The G Flex also has a nifty feature hiding away in the camera settings for face tracking. No, it's not the normal face tracking that you're thinking -- or, it is, but it's used in a new way. The new feature allows you take 'selfie' photos without having to worry whether or not your face was captured in the shot. When enabled, the camera will start looking for your face to focus on and when this happens, the power button will begin to blink yellow. When the camera has successfully found and focused on your face, the key will turn green and you're ready to go.

The 3,500 mAh battery on the G Flex will easily get you through the day on a single charge. Our first day test driving the G Flex's battery, we were streaming video for a few hours, playing Ingress (requires screen to be on at all times with GPS), browsing the web, and listening to hours of music, the handset lasted for 17 hours. With moderate use, the battery managed to squeeze out almost 24 hours on a single charge.

Overall, the battery on the G Flex can go the distance you want it to. Given the size of the display, we'd expect the battery to be able to suit the average user's needs, and it definitely delivers. 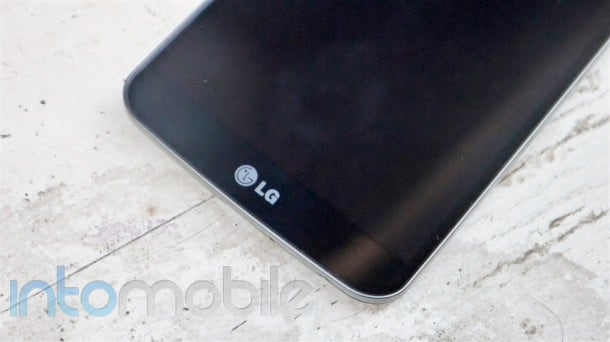 The LG G Flex is possibly the most interesting devices we've seen all year. The curved and flexible display alone will have people interested in the G Flex, but it offers much more than that. The self healing back cover, great camera, and neat software features make this one of the best phones around if you're looking for a phablet. That said, the G Flex isn't perfect.

We're sure that the 720p display is going to be a deal breaker for some and we do really wish that LG had put a 1080p display into the handset. Still, the device is unique enough that some just won't care about the display resolution, but some definitely will.

While it's clear that the G Flex will turn heads because of its display, the handset itself still provides some great features, even without the curve. Utilizing the power button's LED with the new face tracking feature is very interesting and something we've never seen before on a smartphone. LG is really flexing it's muscle and know-how with its smartphones, offering up some refreshing features and designs that set it apart from the competition.

As far as competition goes, there really isn't much to speak of. The Samsung Galaxy Round is clearly the only handset similar enough to make comparisons with the G Flex and even has a higher resolution display. That said, the G Flex's unique hardware and software features have LG winning this round.

The G Flex's existence may well be just a proof of concept at the moment, but it's also proving that LG and flexible smartphone technology are just getting  started.