Finally, we’ve got to play with Xiaomi Mi3, the phone we’ve been hearing about so much in the past few months.

As you may know, Xiaomi has been growing like crazy, doubling its sales from year to year. Moreover, it has managed to attract Google’s very own Hugo Barra, who will undoubtedly help the firm expand to markets all around the world.

First thing we should say is that Mi3 is an awesome product by any stretch of imagination. Heck, this is arguably one of the BEST LOOKING phones I’ve ever used. You got that right – the Mi3 is that great!

It comes with top-notch specs that include a fast quad-core processor, 2GB of RAM, 5-inch full HD screen, 13-megapixel camera with Sony-made sensor, 16 or 64 GB of internal storage, and so on and on. The model we’ve got for review gets its power from Qualcomm’s Snapdragon 800 rather than NVIDIA Tegra 4, which is used in the TD-SCDMA variant offered by China Mobile. It lacks 4G LTE connectivity support but that should come in an updated model released later in the year. If you can live with HSPA+ speeds, you can already grab this unit from Xiaomi World which was kind enough to give us the unit we’re reviewing here. Otherwise, you can wait for another month or so.

Let’s proceed with our review, shall we?

Again, we're talking about a high-end product here, one that easily fits the super-phone category. Here's the specs run-down:

Also worth mentioning is that inside the simple yet fancy box, you get a wall charger with microUSB to USB cable, and a thin simple user guide. Headphones, unfortunately, are not included. 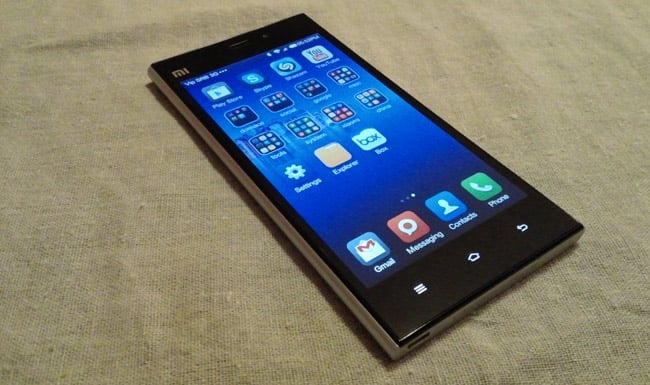 It's easy to love Xiaomi Mi3's design. At first glance it looks like some Nokia Lumia device, but the more you hold it, you see the many differences. First of all - it has a solid-metal back, and it's thinner than (pretty much) any Lumia.

Above the screen there's a front-facing camera, while main (rear) camera is located in the top left like on the iPhone. Also on the front, below the screen, are backlit capacitive buttons.

A SIM tray that can "handle" full SIM card is located at the top (iPhone again), and here you'll also find a 3.5mm headphone jack. On the right side, we have the power button and volume buttons. 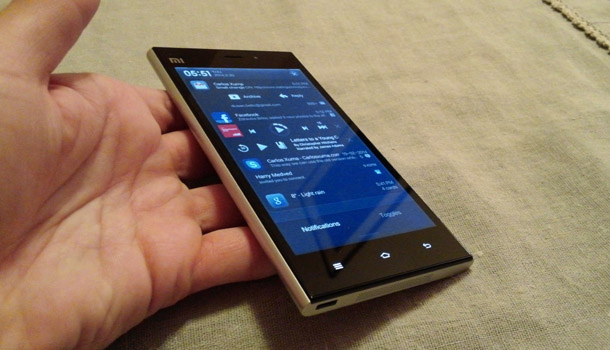 In a word - awesome. It's by far the best built device I've ever used. The only other phone that can come close to it is the HTC One. All other devices are not in the same league with the Mi3.

According to Xiaomi, the Mi3 rocks "internal magnesium alloy structure incased in three layers of graphite," the fact that makes the end product such a joy to hold. We would give it score 10 out of 10 for build quality. It's that awesome. 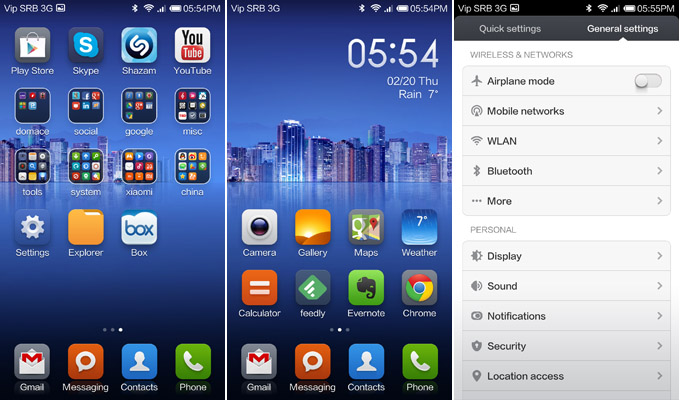 As that's usually the case with all Xiaomi phones, the Mi3 comes with a special version of Android called MIUI. It's easy to use and you'll quickly get familiar using the phone. We can't help but note that MIUI looks a lot like the iOS, and that's the fact that makes it so fancy. There's no dedicated app drawer and in order to organize all of the apps, you'll have to create folders. Not a big problem as far as I'm concerned.

What's notoriously missing are Google apps and Play Store. That, unfortunately, kills the out-of-box experience. You can quickly install these by searching for "Google" in the MiStore - tap on the first result and after that app is installed, you'll be able to add Google Apps (start with the Play Store and take it from there).

Yeah it's a (temporary) pain but it's definitely not a deal breaker. Woz agreed to go through this process to join the "Xiaomi ride" and we think those extra few minutes you'll put into making your Mi3 Google-friendly are well worth the effort.

On the plus side, the Mi3 comes with few cool apps like easy backups and the ability to control the root rights, which is handy for tech-savvy users. 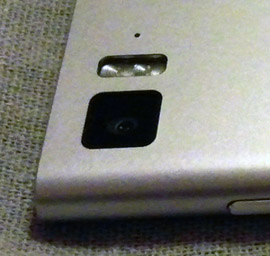 Camera is pretty much on par with what we've seen on many other Android phones. Sure enough, Sony, LG and Samsung have more advanced software with a ton of features the Mi3 lacks, but again - this isn't a deal breaker for me. I rarely, if ever, use some special effects. And besides, if I need something like that, I can always install a third-party camera app.

That said, it's important to add that the built-in camera app is pretty solid. It has an HDR mode, as well as a number of filters you can use to add a dose of life to your photos. The software allows you to take up to 10 pictures per second, and can even take RAW photos if you fancy so. You can manually set ISO, exposure time and focusing.

The main (rear) camera is powered by Sony Exmor 13-megapixel sensor with F2.2 aperture, and has a wide angle 28mm lens. There's also Philips-made double LED flash to make sure you can take both photos and videos in low-light conditions. It, however, lacks Optical Image Stabilization.

As for the front camera, it's a 2-megapixel shooter that is supported by several filters like intelligent "beauty corrector," and the ability to identify gender and age. Yup, you shouldn't have problems taking nice selfies with the Mi3.

I'm not an expert on call quality but can say that the Mi3 sounds like any other phone I've tried in the past. And I haven't tried those devices explicitly known for their bad call quality. So in this department I would say Xiaomi's baby is on par with competition. There could be some differences but, honestly, I haven't noticed a thing.

When it comes to battery life, the Chinese firm made sure their flagship device can take on other top phones. The Mi3 comes with a solid 3050 mAh battery; in comparison, the Samsung Galaxy S4 has a 2600 mAh battery, Sony Xperia Z1 and LG G2 - 3000 mAh, while Nexus 5 and HTC One each have a 2300 mAh battery.

I was able to get through the day on a single charge, and I consider myself a heavy user who often fires-up Wi-Fi and enjoys streaming podcasts and audiobooks to a Bluetooth headset. 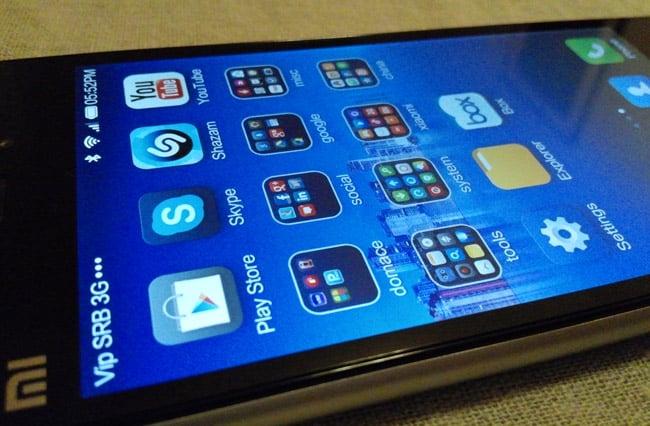 The Xiaomi Mi3 is an awesome device and we do think the so called "Apple of China" has what it takes to compete in the Western market. Before doing so, they will have to include LTE connectivity support to the Mi3, and as far as we've understood, something like that is in works as we speak.

The Mi3 fares well when compared to other high-end smartphones. It may lack some tricks on one front, but it delivers some other features on the other. As I've noted before, this is the one of the best looking phones ever. Perhaps even the best looking one.

Thanks to the top-notch specs found under its hood, you can't go wrong with the Mi3. Even if you end-up disliking the company's MIUI software (we doubt), you can always cram some custom ROM to it. We still suggest you to explore Xiaomi's custom UI; it's easy to use while offering some handy shortcuts along the way.

So if you like what you've read and can live with HSPA+ speeds, feel free to proceed to Xiaomi World to get yourself the brand new Mi3. You won't regret buying it! ;)