When a new, up and coming product is as hyped as the venerable Apple iPhone, there will undoubtedly be myriad market analysts running surveys and polls right up to the actual launch. But here’s the thing, as (over)hyped and promoted as the iPhone is, these polls and surveys seem to suggest that there are more people who do NOT want an iPhone than there are people willing to drop $600 on a first-run device from a newcomer (even if that newcomer is Apple).

One recent poll, which we actually covered earlier, by Let’s Talk, suggests that 52% of those using a music-oriented mobile phone would forego the opportunity to get an iPhone (read: don’t want one). That is a majority in most people’s books. Now that’s a pretty interesting little statistic in itself, since the iPhone is a music phone and should most strongly attract the music phone crowd. And, when you take into account all these other statistics, Steve’s bright-eyed sales goal seems to have a dim future.

But who cares if most music phone users aren’t feeling the draw of the iPhone like you are? Bully to them, you say. Well, bully to you because selling that vital organ to buy that iPhone just left you without a liver (you should have sold a kidney)! At least that is what Compete Inc. is saying. Apparently USD $500 (let alone a freakin’ kidney) is a tad bit pricey for a cellphone. Compete reports that only 26% of people would buy an iPhone, of which only 1% would pay $500. One the flip side, 42% put in a personal buy rating for a price of 200-299 clams. 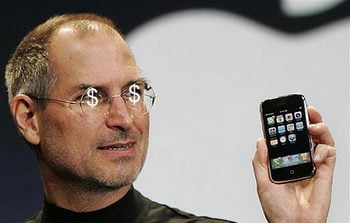 ChangeWave Research also checks in with their own version of the same story. According to ChangeWave, there is only 9% of the population that is somewhat to very interested in getting the iPhone when it drops. That’s less than 1 in 10 people! What could be turning all these people off? Well, 28% are turned off by the high price (surprise!), while 55% said that their current phone is enough for their needs, 7% cited their dislike for Cingular, and sincerely surprising was the 2% that said they didn’t like the features or touchscreen. Put it this way, I bet more than 1 in 10 of your friends wanted an iPod. Apple’s iPhone may not fill iPod’s shoes.

That's right folks! The future is here! Solar powered cell phones have crossed over from imagination to reality. High Tech...