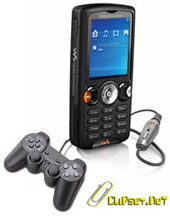 There’s a rumor flying around the web, that Sony will invest yet another of its popular brands to the Sony Ericsson JV. After Walkman, Cybershot and Bravia, the Japanese giant may decide to mobilize its Playstation Portable (PSP)..

Apparently, Sony Ericsson is working on the new breed of “gaming” phones that according to some earlier speculations could use Nokia’s Next-Gen N-Gage platform. Neither Sony nor Sony Ericsson has released anything official on this, but somehow this move makes sense. Sony could certainly benefit from such move, as more and more users are playing games on their handsets. Having two devices (PSP and a phone) instead of a one just doesn’t make much sense in the long run.

We’ll watch carefully for this space, and keep you guys and gals well informed… (via: Esato)

O2 users in the Ireland are about to get some Windows Mobile love, as the carrier introduced the XDA Orbit,...