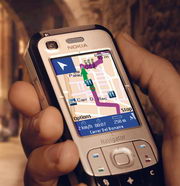 The Finish giant always wants to go step further. Apparently, they are planning to make all their devices location aware in the future.

According to the popular navigation software developer and one of Nokia’s partners, Route 66, sooner rather than later “we’ll see GPS in everyday mobile phones – even pay as you go cheapies.” It will be another selling point for the handset manufacturers. Still, the battery issue remains, as GPS is draining the power of the phone.

I like the idea. Just hope that we’ll also see more powerful batteries along with this. We’ll watch this space carefully… (via: Navigadget)

Verizon will also carry the Treo 755p; Plus, it has appeared on Sprint site

We've already talked about new Palm OS powered Treo 755p, and that it will soon hit the Sprint's shelves. Now,...