Samsung looks to be investing in some hydrogen powered fuel cell research. A patent application that was filed by the company, back in 2006, was recently published by the FCC and details Samsung’s intention to use their slim fuel cell in future handsets. The “multi-layered thin film hydrogen fuel cell” has overcome the previous obstacle of “low efficiency in hydrogen storage,” which caused previous fuel cells to be to large and bulky for mobile phone applications.

The patent application outlines Samsung’s fuel cell technology as a

“multi-layered thin film hydrogen fuel cell system which is applicable as a power supplying device like a battery or a portable electric generator for a portable electronic device such as a mobile phone, a personal digital assistant, a camcorder, a digital camera, a notebook computer and the like. “

Hydrogen powered fuel cells seem to be just around the corner for mobile phones! But, how long to they last between charges? And how are we going to “charge” these things? We’re eager to find out! 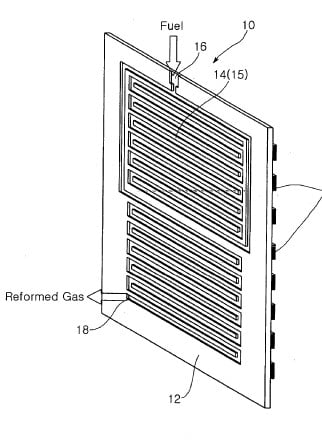 Have a camera phone? Sure you do - as most of the latest handsets come with a built-in camera. Apparently,...