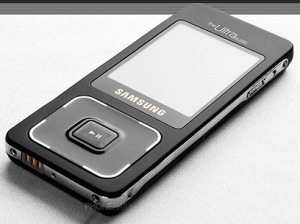 Samsung’s F300 UpStage Ultra Music Phone (that’s gotta be the longest moniker, ever) is barely out of the starting gates and Samsung has already announced the sequel to their music-phone. Actually, the Samsung F308 is more of a variant than a sequel, but we just couldn’t resist the chance at a witty headline. The F308 brings the same music, but on the GSM networks that everyone loves. Nothing’s changed except the switch to GSM radios, so you can expect the 2 megapixel shooter, FM radio, Bluetooth, and 100MB of memory on this schizo-phone.