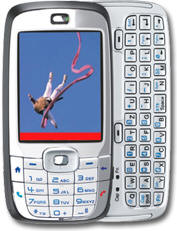 Vodafone has released the HTC Vox as VDA V in Germany. We’ve already posted several posts about the HTC’s side-slider device, and there’s not much more to add about it. Still, let’s recall some highlights. The HTC Vox is a quad-band smartphone, powered by TI’s OMAP 200 MHz CPU, that runs Microsoft’s Windows Mobile 6 Standard edition. Furthermore it boasts Bluetooth and WiFi connectivity, a 2 MP camera and the full QWERTY (QWERTZ for the German market) keyboard.

Wow, Sony Ericsson is really on a roll here. First they announce all those slick new phones, including the incredible...