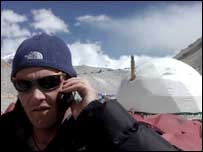 Remember when we told you about that somewhat hair-brained idea about trying to get “high” with Motorola? Apparently, that Brit climber Rod Baber made it to the top of that notorious hill – Mt. Everest – with a Motorola Z8 (the Media Monster) in tow. The “record-setting” call was made from the northern side of the mountain, through a Chinese cell tower, not once, but twice. Baber called into a voicemail service (setup by Motorola to ensure the call would be recorded) and then to his wife and children from atop the 29,035 foot peak. He was kind enough to even send Motorola a text message – “One small text for man, one giant leap for mobilekind – thanks Motorola.”

Before making the final ascent to the summit (taping batteries to his body to keep them warm enough to work), Rod Baber said, “Everest symbolizes the greatest challenge to any climber,” adding, that the summit call was a “once in a lifetime” opportunity.

Qualcomm is planning to get into the MVNO game with the launch of a new MVNO, LifeComm, with focus on...