Just as we posted about the new Sidekicks coming to T-Mobile, the new details appeared. Apparently, one of the upcoming devices will have a slider, not a rotating “sidekick” mechanism for opening up the keyboard. One wonders why it’s still called Sidekick? 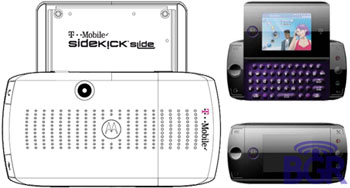 In terms of specs, the Sidekick Slide will boast a transmissive 2.4″ QVGA screen, same 1.3 MP camera, microSD card slot, and will run under the new Danger 4.0 OS. Next, the new Sidekick will have round keyboard keys and the assisted slide mechanism (like in Samsung sliders?). Dimensions of 118x62x17.5 mm suggest that this will be the smallest Sidekick so far. It is expected to hit the market somewhere in September, though the date is still not confirmed.

Remember that cute little Bluetooth headset that Apple announced as an official accessory for the iPhone (and yes, we said...