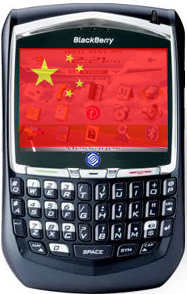 Maybe there were no Independence Day in Canada yesterday, but RIM had a good reason to celebrate. After eight years of trying, the maker of the popular BlackBerry devices finally got the green light for entering the red market. 🙂

To pursue its China dream, RIM has partnered with China Mobile to bring some push-email love to the world’s fastest growing economy. Initially, RIM will offer its popular BlackBerry 8700g handset to corporate customers in key cities including Beijing, Shanghai and Guangzhou. BlackBerry addicts just couldn’t wait for the end of next month, and RIM already received 5,000 advance orders.

Guess, the next step will be localization — something they’ve already did for its customers in Japan.