We all know mobile gaming is set for an explosive growth in the coming years. Sony will most certainly make the PSP phone at some point in the future, Nokia is preparing to launch the next generation of NGage platform and Samsung? Well, the Korean giant is also eyeing this potentially very lucrative market. Their latest patent filing called “Joystick apparatus for mobile terminal” describes a new way of controlling games on the phone. 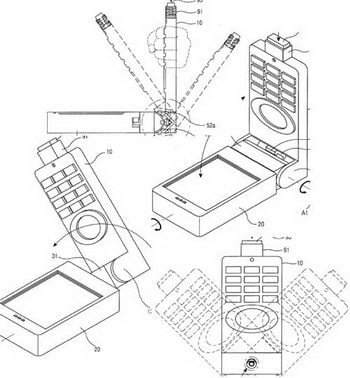 According to Samsung, playing with numeric keypad just doesn’t do the job. Their patent reveals a new kind of game control, which involves converting of the lower part of the clamshell phone into a joystick. It may sound simple, but it actually requires a very complex mechanism consisting of multiple magnets and Hall effect integrated circuits to capture 3D movements of a joystick and turn them into the game control signals.

Sounds interesting as far as I can tell. Now we just have to wait for Samsung to bring this technology to the market. C’mon guys, hurry up!

Microsoft's Zune may soon have some competition from Apple. A September 1, 2006 patent filing indicates that Apple might be...