Forget all the fancy cases, docks, and headsets. Nothing matches your brand new iPhone like a new BMW! The German car-maker wants us all to know that all their cars since 2004 will work with your iPhone (and iPod for that matter). It’s really nothing new or even a real announcement – more like an FYI for the iPhone community. Hey, if we were equipped with an iPhone cradle, we’d be riding the iPhone hype-wave too! 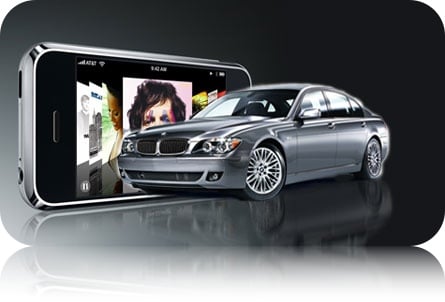 And you thought plunking down that $600 on the counter was the end of it – it turns out that you’re going to need a whole new car to accessorize that iPhone of yours. You shoulda known better.

Update:
Reader Amy tells us that her 2004 model year BMW does not fully work with the iPhone. Apparenty, there’s some wacky interference that forces you to choose to use the iPhone solely as a phone or as an iPod – not both. Anybody else have this problem? Are there issues with later models (’05, ’06, ’07?).

Motorola's gettin' all styled up with their newest iDEN handset - the Motorola i290. Other than the i830, this thing...