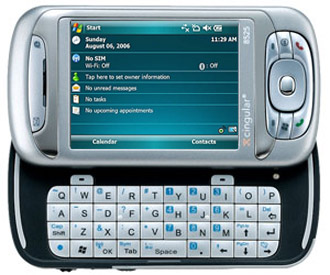 You’re eyes do not deceive you, you read it correctly. Thanks to the ingenious ROM “chefs” over at XDA-developers forums, an AT&T branded Windows Mobile 6.0 ROM upgrade is now available for all Cingular/AT&T 8525 owners! The ROM is really just the already available WM6 ROM for the  European HTC TyTn (Hermes), but in AT&T guise. The cooked ROM is about as “official” as you are going to get (for the time being) to an AT&T-released ROM – and it’s free. That’s a word we love to hear.

Brave smartphone modders with an itch for Windows Mobile 6.0 can head on over to the XDA-developers forum for the downlow on how to get your hands on this ROM.  Just follow the instructions carefully, and after having fully read through them – to avoid turning your expensive, high-end smartphone into an expensive, high-end paper-weight.

Wouldn’t it be nice to get your 8525 to look like the picture above? Yea, we thought so – get on it.

Calling all Apple iPhone owners – is your AT&T EDGE network still down?

We want to hear from you. The Into iPhone team wants to get a clearer picture of how widespread and...