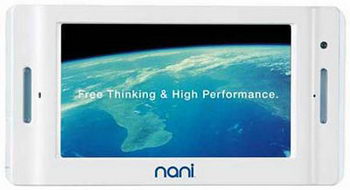 Consumers in Japan may not have the iPhone, but they certainly have cool lookin’ phones. One such device that resembles Apple’s handset is Sophia Mobile-made Nani phone. As you can see from the image above, just like the iPhone this device relies solely on a huge touchscreen. However, unlike “the most hyped handset ever” it boasts a larger 4.3″ screen that can display resolution of up to 800×400 pixels! Plus, there’s the microSD expansion slot, camera, WiFi and a TV tuner. Surfing the web on a such huge display promises true web experience, one that would even eliminate all kinds of zooming in and out. Now when I’m thinking, this device is like the Nokia N800 on steroids. Hopefully, we’ll seen it launched outside of Japan as well, though it still waits to be announced at still undisclosed price.