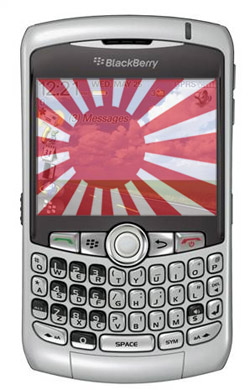 With China getting their very own CrackBerry, it was just a matter of time before Research In Motion brought the finger-cramping BlackBerry line to China’s island neighbor, Japan. The Japanese-language version of the BlackBerry was announced yesterday – for a July 23 launch from Japan’s largest wireless carrier, NTT DoCoMo.

An English-language BlackBerry has been available in the Japanese market since last September, and the new Japanese version will only be available to corporate types. Ryuji Yamada, an NTT senior executive in corporate marketing believes the BlackBerry will “revitalise Japanese businesses” – despite the BlackBerry’s low brand recognition in Japan’s mainstream (where emails have been widely available on mass-market mobile phones).

“The reason why the BlackBerry is so popular in countries like the United States is that it receives emails while their cellphones don’t,” said Kenji Nishimura, telecoms analyst at the Daiwa Institute of Research. So we’ll just have to see how RIM fares with the mainstream Japanese market. We’re not holding our breath for any sort of spectacular success.

BMW – the perfect match for your Apple iPhone

Forget all the fancy cases, docks, and headsets. Nothing matches your brand new iPhone like a new BMW! The German...