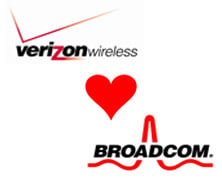 With no end in sight for the juvenile legal battle between Qualcomm and Broadcom, carriers are US carriers are starting to feel the pinch of the ITC’s ban on 3G devices utilizing Broadcom’s intellectual patents for more efficient power consumption. Sprint has already gone ahead and implemented their own software patch to maximize battery efficiency, effectively bypassing the ITC ban on Sprint’s 3G handsets (and hurting Qualcomm’s chances of a presidential veto in the process).

Now Verizon has backdoored Qualcomm right out of the picture – going behind Qualcomm’s back and licensing the battery-saving patents directly from Broadcom. The two companies announced the new licensing deal today – which includes the stipulation that Verizon will “ease its efforts to overturn the ITC’s recent order banning Qualcomm chips.” This move essentially loses Qualcomm one of its largest allies in their petition to overturn the ITC ruling.

Verizon will pony up $6 per handset to Broadcom – the exact same amount that Broadcom offered to Qualcomm as a settlement (take that, Qualcomm).  The deal limits quarterly royalties to $40 million and a lifetime limit of $200 million. At $6 per handset, we can see Verizon hitting that lifetime cap in short order.

Scott A. McGregor, President and Chief Executive Officer of Broadcom, stated that, “Broadcom welcomes the opportunity to work with Verizon to ensure that next generation cell phones and personal digital assistants operating on the Verizon Wireless network will continue to flow into the United States.” (read: “in your face Qualcomm, how do you like them apples!”).

Virgin Mobile USA Inc. today announced that they intend to increase their IPO offering five-times over their initial SEC filing...