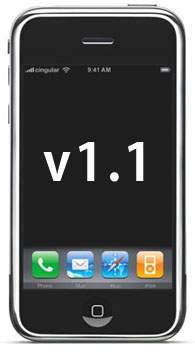 It’s been about a month and Apple is prepping the first release of iPhone updates. We’ve been looking for the first update to enable iChat features and possibly even MMS support, so imagine our excitement when we heard that the upcoming update might include new widgets, chat client, location-based services, MMS support, and maybe even some Mac OS X Leopard integration!

Now, if only we could get 3G enabled on the iPhone. Alas, there are no hidden 3G chips to enable, and Abramsky believes that the 3G version of the iPhone will not be available (even in Europe) until Spring of 2008.

Thanks, Apple! We love the fact that our iPhones can be easily updated through a simple download, rather than waiting months for a whole new firmware version.