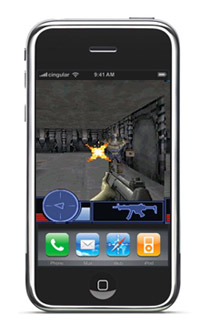 It’s really just common sense. Apple’s got to release some official gaming applications for the iPhone. As nice as web-based gaming applications can be, nothing can beat the speed, integration, and convenience of a natively installed game application. But, until we get more solid proof that Apple is working to help iPhone users across the nation waste precious working hours playing on the iPhone, this latest nugget of code will have to be filed as speculation, nothing less.

Apparently, a bit of fishing around inside the iPhone’s code reveals a couple of lines that seem to directly imply that native iPhone gaming will soon be upon us. Here’s the code:

Why would Apple include code that would prompt a user to confirm a game deletion? Because they are likely planning on releasing games for the iPhone. We’re done speculating on what features a future iPhone update might bring, but we sure do hope that a v1.1 update come toting some games (and iChat, of course).

By now, you're probably aware that Apple released the new, even better looking iMac. Speaking on the subject, 37signals' Jason...