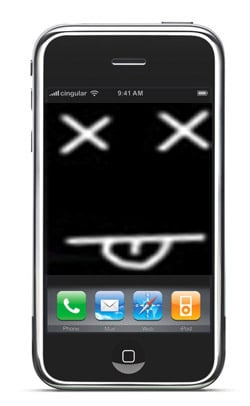 Just when we thought it couldn’t get worse (seriously, we thought it would stay an isolated and rare defect), Nomura International analyst, Richard Windsor released a note to clients indicating that the iPhone’s “dead strip” display problem could become more widespread.

Apple bought the rights to the screen technology used in the iPhone from a Finnish firm. Finnish firm reported that usage led to the same unresponsive display problems after some time. Apparently, 3 to 6 months of “extensive use” would start to degrade the technology and cause a lose of sensitivity to touch-inputs. This suggests that the relatively new iPhone fleet in the US could start to exhibit similar problems with time.

With technologies as advanced as multi-touch, and production volumes as large as they are, hardware faults could very reasonably start to crop up.

We’ll keep a close eye on this problem for you guys, but should you find yourself facing the dreaded “dead strip,” drop us a line and let us know. Seriously, we’d appreciate it.

Update
The iPhone does not use heat chemical deposition technology, nor does it detect inputs based on heat.

Gadgets are cool and all (believe us, we love gadgets), but what good are they if they don't play nice...