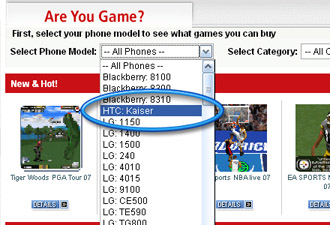 We have yet to get HTC’s flagship smartphone on any US carrier and it seems Rogers Wireless is already making preparations for the HTC P4550 Kaiser (aka TyTn II).

One eagle-eyed Howard Forum user spotted something interesting on the Rogers Wireless website. As the above pic shows, Rogers Wireless has listed the HTC Herald as a choice of handset choices for game downloads through its online store. That’s gotta be pretty exciting for our hockey-loving friends to the north, but keep in mind that this could easily be a slip-up. But, assuming this whole situation isn’t a mistake, Rogers could still take longer to launch the Kaiser than AT&T (slated to go live on September 3 as the AT&T Tilt).

Canadian WinMo fans are likely squirming in their seats in anticipation of the HTC Kaiser. We’d be green with envy if Rogers got the HTC Kaiser before AT&T.

It looks like HTC is making good on their promise of bringing the long-awaited Windows mobile 6.0 upgrades to their...