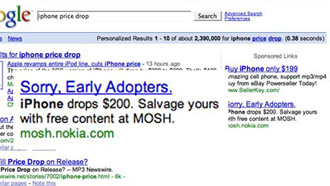 So it looks like early iPhone adopters aren’t the only ones feeling the pain of having their uber-expensive devices price-slashed like last year’s fashions. Nokia feels our pain too. Not a day after Apple announced their early-adopter screwing policy, Nokia has launched  a Google ad campaign to empathize with our $200 loss and offer a chance to redeem our iPhone’s worth by using the Nokia mobile social-network, MOSH.

Apparently, the MOSH social network is enough to help us “salvage” our newly cheap iPhones. We’re not sure we’re MOSH is going to help us feel any better about seeing our neighbor pick up an 8GB iPhone for just $399, but hey, it’s the though that counts.