Right, this is technically still in the realm of rumor and hearsay, but, seeing as how T-Mobile Germany has pretty much been confirmed as Germany’s iPhone carrier, we can’t help but think that this one’s got some credibility.

The T-Mobile Germany website had previously leaked an iPhone-specific page, and now it seems they may have let an iPhone advertisement slip through the cracks. Interestingly, the ad seems to confirm he existence and eventual release of a 3G iPhone – with a hefty 16GB of storage to boot. If the specs on the advertisement pan out, the 3G European  iPhone will be capable of pulling down 3.6Mbps data on US wireless frequencies with HSDPA support. 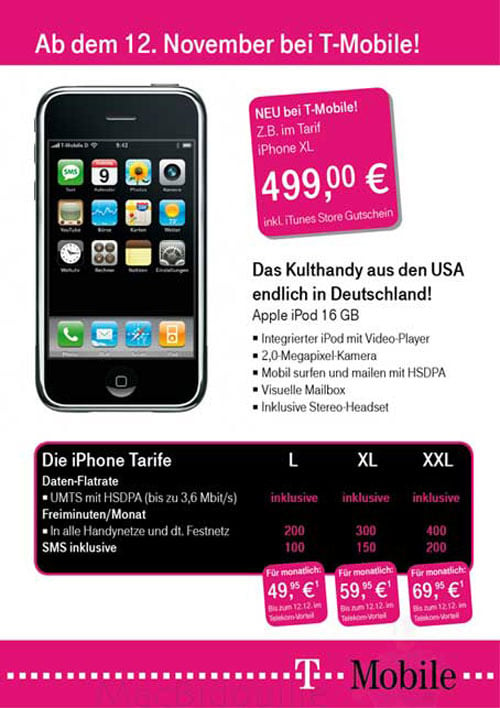 According to the alleged ad, the 3G iPhone will be bringing the same 2 megapixel camera and Visual Voicemail goodies that we all know and love – with a launch date set for November 12.

We gotta admit, the prospect of a 16GB-packin’ 3G iPhone in Europe has us turning a slight shade of green. Those Europeans get all the good stuff. But, at least we pay a lot less for our iPhone rate plans and get a boat-load of minutes. Yeah, that makes us feel a little better (barely).

It seems that folks of Amazon.com are getting impatient, hack they've launched the page dedicated to the Pantech's upcoming device...