The rumors keep flying. This time around, we’re hearing that the hotly-anticipated AT&T Tilt (aka, HTC TyTn II Kaiser P4550) and the Motorola Q9 Global (aka Motorola Q9h) will be hitting AT&T’s GSM frequencies on September 25.

According Boy Genius‘s image of a leaked AT&T internal document, the AT&T Tilt and Q9 Global should be launched a week from now. The Pantech Duo is also supposed to launch on October 9, which aligns nicey with Engadget Mobile‘s launch prediction for the dual-sliding Windows Mobile 6.0 Standard-powered 3G handset from Pantech. But, if Boy Genius‘s launch details turn out to be true, it looks like Engadget Mobile was off the mark on the AT&T Tile and Q9 Global launch dates. 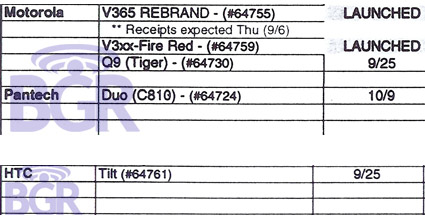 Either way, keep your pants on, the “Holy Grail” of smartphones is still at least a week away.  We can’t take the waiting anymore!

We're all eagerly awaiting Google's entry into the mobile phone market. The near-mythical Google Phone (or GPhone, if you will)...