The one thing that makes stuffy, crowded subway rides in the Big Apple even halfway bearable is the lack of subway riders annoyingly chatting it up on their mobile phones. Well, the great city of New York is looking to change all that. Subway riders have been asking the city to make wireless cellphone signals available underground, and it seems New York’s higher-ups have decided to give them what they want. 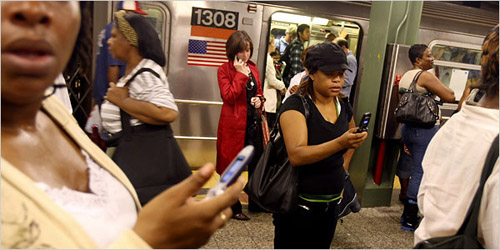 New York City Transit has announced plans to let Transit Wireless, the company that won the contract to build-out the wireless infrastructure, pay $48.6 million over the next 10 years to bring wireless coverage to the 277 subway stations that are currently sans wireless signals. Transit Wireless will also be paying for the cost of all equipment – estimated at $150 to $200 million.

The good news? Wireless coverage will only be extended to the subway station, and not the actual subway tunnel. So all those mobile phone talkers will have to finish annoying you before stepping off the platform and on the train. It seems that officials don’t actually want subway trains full of angry, annoyed riders.

So, data-addicted New Yorker, keep surfing the net right into the subway station. Just shoot out that email before you step on that train