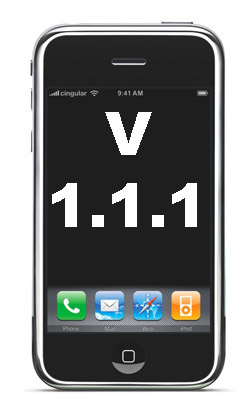 Just as we expected, Apple has opened the flood gates on the newest iPhone update (barely getting it in before the week’s end). We’re now in the world of the iPhone version 1.1.1 and it’s looking better than ever. Tipping the scales at a massive 153MB download (via iTunes), the new iPhone v1.1.1 firmware brings the highly anticipated WiFi iTunes Music Store application, enhanced security (which means all current unlocking solution are effectively dead), and increased volume (yes!).

We’re still going to advise all you iPhone unlockers out there to wait on installing this update, as you run the considerable risk of bricking your iPhone. It looks like Apple wasn’t fibbing when they said that applying this update to an unlocked iPhone would cause irreparable damage. Many unlocked iPhone users out there are reporting that, even though the update process itself went smoothly, the iPhone threw an error message upon rebooting. It’s up to you, but if it were us, we’d wait on the iPhone Dev Team to release their unlock-reversing software sometime next week.

And all you third-party app fans with Installer.app installed, take heed – the iPhone v1.1.1 update will wipe out all natively installed applications. Having Installer.app and any third-party apps installed on your iPhone doesn’t seem to affect the update process – you won’t have to remove them prior to updating, but any non-Apple components will be wiped from existence. If you like all those cool little applications on your iPhone, don’t update until the boys at Nullriver have figured out how to make everything play nicely with v1.1.1 (if it’s even possible).

There are also mixed reports of the new update disabling Ambrosia Software’s iToner ringtone-making software. So take that for what it’s worth.

Here’s a quick rundown of new features in the iPhone v1.1.1 update:

Again, if you’ve unlocked your iPhone for use on non-AT&T networks, DO NOT UPDATE. It will brick your iPhone. Wait until the iPhone Dev Team figures things out.

But, if you want to try out the WiFi iTunes Music Store, louder speakerphone and receiver volume, TV-out, and the nifty double-tap shortcut feature, go ahead and update your iPhone. Just to be safe, uninstall those third-party apps – better safe than sorry, we always say.

Not that we haven't expected this, it's just kinda sad to see the "happiest MVNO" shutting down. As of September...