Just like we expected, HTC’s press event in London today took the official wraps off their HTC Touch Dual (which we’ve been expecting to have been called HTC Touch Slide), HTC S730, and HTC P6500 Sedna. Europeans can revel in the privilege of getting these slick, new smartphones before everyone else (Japan notwithstanding).

As you may already know, the HTC Touch Dual (codename: Nike) takes the HTC Touch platform and spices things up with some 2100Mhz 3G HSDPA love and that trick, vertical-sliding keypad – measuring 107 x 55 x 15.8mm and tipping the scales at 120g. But, early reports of the HTC Touch Dual toting a WiFi radio seem to have been in haste – it seems HTC didn’t see fit to endow their European HTC Nike with the WiFi goodness that the Japanese enjoy so much. Either way, the 400Mhz processor, 2.6 inch touchscreen display, 256MB ROM/128MB RAM, Bluetooth 2.0, and microSD card slot – all powered by Windows Mobile 6.0 Professional – will probably be enough to keep you Europeans happy. Expect the same innovative TouchFLO interface, but, being a European device (for now), the HTC Touch Dual will only be toting a tri-band (900/1800/1900Mhz) GSM radio. We’re looking for Orange to bring the HTC Touch Dual to select European countries at an, as yet, unknown price. 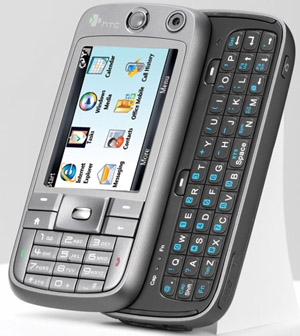 The HTC S730 that was rumored to be released “really soon” made good on the promise to bring “worldwide” 3G (HSDPA) and WiFi to the 400Mhz, Windows Mobile 6.0 keypad/keyboard hybrid beauty. All you fans of HTC’s hybrid design in the HTC S710/S720 (Vox/Libra) will be happy to know that HTC is bringing the HTC S730 to Europe. We’re glad HTC decided to include the spring-loaded auto-opening slide mechanism in their S730 – it’s those little details that really make a smartphone shine.

Finally, the HTC P6500 Sedna was announced as an enterprise smartphone with 3.5″ screen, 3 mega pixel camera with auto focus, barcode and fingerprint scanning capabilities, two SD-IO card slots for almost unlimited expansion, and integrated GPS. And, should your HTC P6500 fall into the 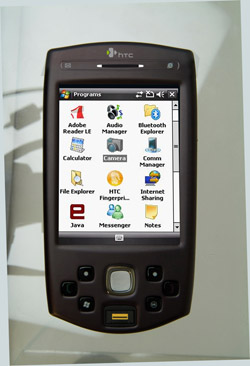 wrong hands, there’s even a remote-data-wipe features – which will keep all your little secrets your own. With 3G (HSDPA), the HTC P6500 is aimed at logistics companies, hospitals and police looking to bring a Windows Mobile 6.0 Professional to their workforce.

HTC’s press event turned out to be everything we wanted – a few new Windows Mobile smartphones with the features that are sure to keep HTC at the top of their game. We’d love to get our hands on the HTC Touch Dual, although the lack of WiFi is making the HTC S730 look ever more appealing.