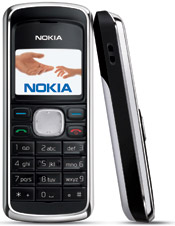 It looks like Nokia is really starting to take the North American mass-market seriously. The Finnish handset giant has just launched their entry-level CDMA monoblock in the Nokia 2135.

As a “low-ender,” the Nokia 2135 doesn’t really shine in the feature-department, but it gets the job done. With 1xRTT data, speakerphone, 3.5 hours of talktime and 11 hours of stand-by time, the Nokia 2135 is “not too much, not too little, but just right.”

We’re looking for this super-affordable Nokia candybar to hit US CDMA carriers in the near-term – as in this month. We need more power from our handsets, but as a low-cost, or even free, offering from the likes of Sprint or Verizon, the Nokia 2135 could be an attractive option to the mass-market.

Oh, and get this, we’re hearing that the Nokia 2135 wasn’t made by Nokia. Sure, Nokia designed the hardware and UI,  but the component integration was handed off to an unknown company. Anyone know who actually manufactured this thing?

Broadcom just blew the chipset competition away. The US chipmaker has announced their new "3G Phone on a chip" solution...