The latest round of rumor and hearsay surrounding the iPhone’s development future comes from Businessweek. According to “sources familiar” with these matters, “Apple will release a software-development kit for the iPhone in early 2008, enabling programmers to create games, business-productivity tools, and countless other applications for the device.” The iPhone Software Development Kit (SDK) is slated to be released in January at Apple’s Macworld conference. As we mentioned before, Apple is waiting for the launch of the next Mac OS X iteration, Leopard, to launch its iPhone SDK. As we mentioned before, Leopard could integrate support for iPhone apps. 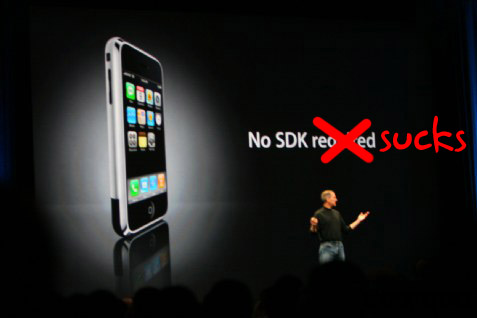 If Apple does end up releasing an official iPhone Software Development Kit (SDK), we could see slew of Apple-sanctioned iPhone applications next year – without having to jailbreak your iPhone. However, we’re still not sure if Apple will be releasing a full-fledged SDK or simply expand support for iPhone web-apps by supporting offline storage.

Offline storage of web-apps would still be cool, but they’re limited by the AJAX environment – natively installed iPhone applications would have soo much more power. Still, imagine how cool it would be to access all your favorite web-apps locally, without a wireless connection. Only time will tell.