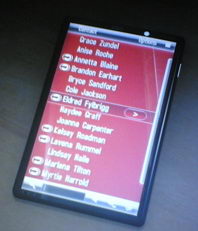 We love hearing about the near-mythical Google Phone, the GPhone if you will. Will it be a fully-branded Google handset? Will a Google Phone just be some smartphone using the Linux-based Google OS? We’re still not 100% on those questions, and now there’s yet another rumor to throw into the mix. According to UBS analyst Benjamin Schachter, HTC “will ship about 50,000 cellphones running on a mobile operating system made by the Mountain View, California-based search giant by the end of this year.”

We’ve already heard that HTC is supposed to be manufacturing the Google GPhone, but the question remains – will the HTC-made GPhone be the only Google Phone, or will any smartphone with the Google OS be deemed a GPhone? Benjamin Schachter believes that these 50,000 GPhones will never be seen by public eyes, but rather will  be “going to be available for developers only to understand how the software works.”  He also guessed that other manufacturers are going to get on board the Google Phone train, specifically LG – which bodes well for the rumor that the GPhone will be a Google-made mobile OS as opposed to a full-fledged, branded smartphone.

As rumors go, don’t hold your breath for a branded Google Phone. We know that Google’s got a mobile OS in the works, we just don’t know if Google’s entry into the mobile space will be Google OS-powered hardware or just the OS itself. Stay tuned, we’re excited to see how this one pans out.

The latest round of rumor and hearsay surrounding the iPhone's development future comes from Businessweek. According to "sources familiar" with...