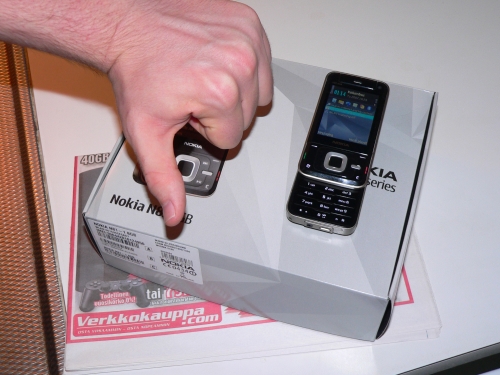 Here it is. The review you’ve been waiting for. 1500 words of gut wrenching, tear jerking, dark humor about a device that is too little too late. Enjoy, after the jump.

Let us begin with the top of this device. From left to right we have a lock switch, a standard 3.5 mm headphone jack and a power button. The lock switch doesn’t operate in the traditional manner of which you are accustomed to on your iPod or Creative product, that is the switch being in one position or the other, it is instead spring loaded. You flick it to lock the device, flick it again to unlock.

On the right side of the device, from top to bottom, is a speaker, volume up and down keys and a camera shutter button. Hitting and holding the camera button for a few seconds launches the camera application; this is super convenient since the S60 operating system limits you to only 6 shortcuts on the standby screen, 8 if you count the two soft keys.

The bottom of the device, from left to right, offers a loop for a phone charm or lanyard, the standard Nokia charging port and finally a microUSB port. The microUSB cable provided with the device locks into place very firmly and gives an extremely satisfying feel upon insertion and ejection.

On the left side of the device there is another speaker bringing the total to 2. The stereo effect is highly pronounced and you will be surprised at how loud this little sucker can get. The back of the device houses a pitiful 2 megapixel camera. Here is a sample: 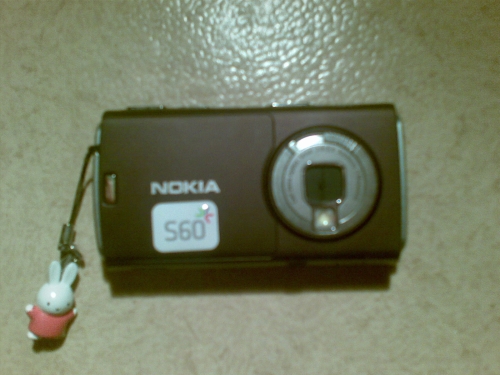 The device as a whole feels like a cheap Chinese toy that kills small children due to excessive lead contamination. It creaks, it rattles and it is not the Nokia you grew up with. The sliding mechanism is spring loaded and quite powerful, but it doesn’t make up for the texture of the plastic. This phone is not for those who get sweaty hands, you will be dropping this thing, trust me. 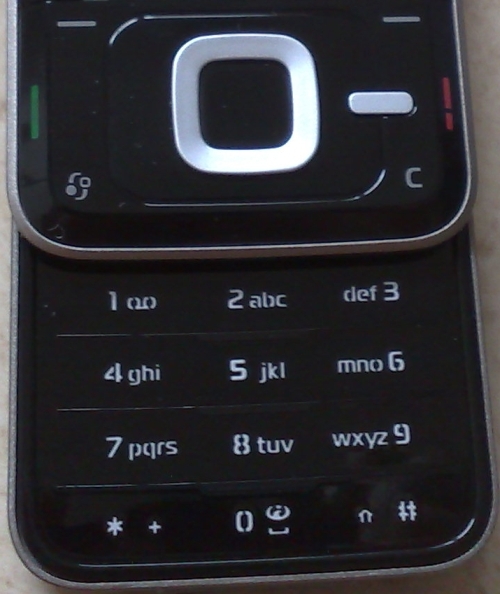 The front of the Nokia N81, right under the screen, is where this multimedia computer goes to hell. There are a total of 16 possible commands you can summon. Don’t believe me? Let us step thru them one by one:

1. Green send key
2. Red end key
3. Left soft key
4. Right soft key
5. “C” key aka the backspace key
6. “Ying Yang,” otherwise known as the application key
7. “The Anssi Key,” pushing this brings you to the multimedia carousel. It is called the Anssi key since he is the head of Nokia’s Multimedia Unit that will disappear in less than 10 weeks after the reorganization. Rumor has it that the Multimedia Key was his idea, hence Nokia people internally naming the button after him.
8. Play/Pause key
9. Next track
10. Previous track
11. Stop
12. Up on the naviwheel
13. Down on the naviwheel
14. Left on the naviwheel
15. Right on the naviwheel
16. OK, the center button on the naviwheel

I may be cheating with the naviwheel, but when you consider the fact that the N95 has 3 less possible commands it makes you think what exactly these people were thinking. All of these buttons in such a tight space will most certainly yield plenty of accidental key presses. Look at something like the Nokia 5310 (below) that was also launched at the Nokia Go Play event in London and admire that the fact that someone was smart enough to stick the music controls on the side of the screen instead of creating a mess in the lower half of the device. The two keys on the top of the device by the ear piece that only light up when using N-Gage, I haven’t used them yet so I can’t comment. 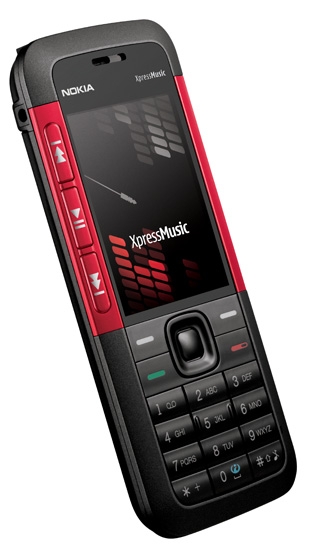 Four of these sixteen buttons have given me more hell in the past week than I care for. The green/red keys are where the Ying Yang and C key should be, period. This may be the very first Nokia device that doesn’t have send and end keys at the very bottom of the device; I hope it is the only Nokia to deviate from the status quo.

Back to the headphone jack, someone asked me how the N81 compares to the N91. I can’t answer that question since I never owned that phone due to the fact that it looks like robotic fecal matter, but I will say this: the audio quality outputted by the N81 is a significant improvement compared to my N95 and it even sounds better than my standalone Creative Muvo.

The keypad is large and flat with very thin lines separating the rows. They keys have no texture at all, but surprisingly texting on this device is a very pleasant experience, my benchmark being the N95 which has been my workhorse for the past few months. The only negative aspect is the light bleeding (below) around the edges of the keypad. It makes a device which already feels cheap, look cheap. 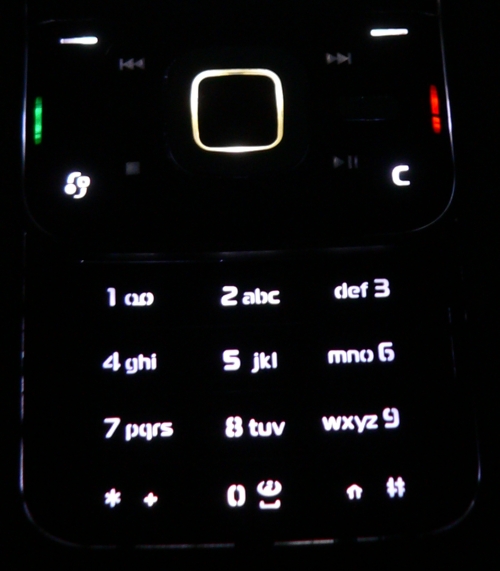 The naviwheel will be the subject of many criticisms. The first obvious flaw is the fact that the “wheel” functionality of the naviwheel is turned off by default. You heard that right, the one feature that makes this device stand out compared with the rest of the Nseries devices is turned off by default. After you turn the wheel on you discover that it only works in the music player application and the Gallery. After playing with a BlackBerry Pearl I was highly intrigued by a new input method that wasn’t a standard directional pad. I was hoping that the naviwheel would give me this new experience for the S60 OS, but instead the wheel is limited to being used for only two applications. Disappointment.

The N81 uses the BP-6MT battery which has 1050 mAh. Good luck killing this thing in one day, I’ve managed heavy data use and audio playback using the built in stereo speakers over 2 days before the device even bothered asking me to feed it some power. Very impressive.

Browsing over 3G is a mediocre experience; this device does not have HSDPA. Browsing over WiFi proved to be problematic. Sites took forever to start loading, once they did however they came down quite fast. Browse over WiFi for more than 3 minutes and you start having time out errors, gateway errors and the device even looses the connection. Highly problematic.

The N-Gage application and the Music Store, these two things are supposed to be a major part of this device; sadly they have yet to launch so I cannot comment on the experience. There are 3 trial games that come installed by default: racing, FIFA and a top down shooter. With the exception of the top down shooter, I was not impressed. N-Gage has yet to launch and the games I did play in London were of much higher quality than this. We will have to wait for those to be released.

The operating system is standard S60 3rd Edition Feature Pack 1. On first boot you have a hair over 43 MB of RAM free. This device does not have any problems at all running a large number of applications. As of this moment I have Screenshot, Gmail, Calendar, Recorder, About, Converter, Clock, Calculator, Notes, Bluetooth, Handy Calendar, Web, Search, Maps, Gallery, Camera, Log, Profiles, Contacts, Music Player and Messaging running with 9.5 MB of RAM free. Ridiculously impressed, especially compared with my N95. 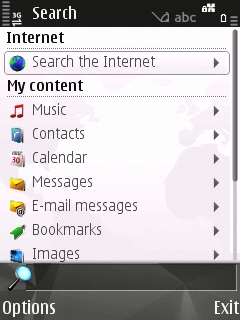 The most impressive application is Search 4.0. If you’ve ever used Windows Vista or Mac OS X then you know how nice instant search can be. Launch the application and type the letter “A,” at this point you see anything on your device, whether it be contacts, music files, documents or bookmarks that start with the letter “A.” Absolutely brilliant and as far as I’ve understood this will be built into all new Nseries device. Here is hoping they just make this application built into the S60 platform itself. 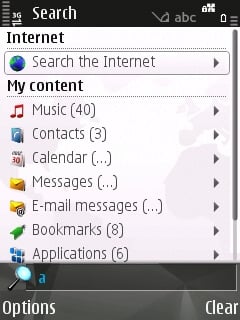 Yesterday I shortchanged a lot of you guys when I simply said “don’t buy it.” That is a mistake I will never make again. I’ll post a full review like this one instead of liberally throwing sprinkles of hate around the internets. What I meant to say, and a fantastic way to conclude this review, is that I would never purchase a device like this and I would never recommend it to any of my friends. You’re capped at 8 GB since there is no removable microSD slot, the camera is horrible and the phone itself feels miserable in your hand.

When the iPhone came out I read a very interesting quote that said “the iPhone is perfect for consuming content, the N95 is perfect for creating it.” The N81 may be perfect for consuming content with the 369 MHz processor giving this baby some oomph when browsing thru your gallery or S60 in general. You can play until your thumbs fall off when N-Gage comes out and the audio quality from the blissful 3.5 mm headphone jack is fantastic. That being said, this device just doesn’t feel like something I would spend 430 Euros on, that is $615 thanks to the slump that is facing the American economy right now. Spend that money and get yourself a brand new North American N95 and 8 GB microSD card. You will be a lot happier, trust me.

Full specifications of the device can be found here. 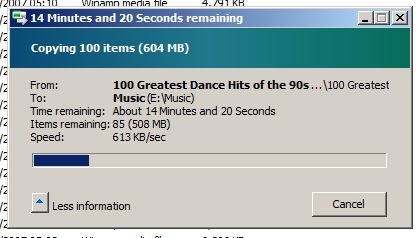 Biskero the Flash Lite Guru stumbled across this S60 document that says: "Flash Lite 3 will be available on selected...