Apple’s been on a touchscreen kick recently. Following on their previous pressure-sensitive touchscreen patent application filings with the USPTO, Apple has again filed for another patent regarding a touchscreen interface.

The newest patent filing, titled “Keystroke tacility arrangement on a smooth touch surface,” reveals Apple’s interest in haptic touchscreen feedback – by which some physical feedback is used to confirm touchscreen inputs. LG and Samsung are using vibration-based haptic feedback systems in their newest handsets, but vibration-feedback is a compromise at best. Apple’s system proposes physical alterations to the touchscreen itself – raised, Braille-like bumps emerging from beneath the screen; or having actual keyboard keys rise up through the flexible touchscreen; or even placing depressed regions under the screen to represent keys – allowing the user to feel the keyboard key indents without physically seeing them. 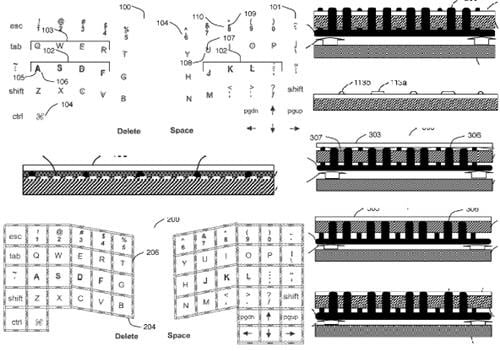 We’ll have to wait and see where and if Apple implements such technologies – perhaps in conjunction with a pressure-sensitive touchscreen. It looks like Apple has not only spurred the touchscreen interface as the future, but is seriously looking to stay ahead of the competition with innovative new tech. Apple could turn haptic feedback on its head with any of these proposed ideas – and really pave the way for touchscreen tech to secure its position as the future of UI inputs. Keep ’em coming, Apple.

Who woulda thunk it? Apparently, there's some rhyme to the reason behind the recent outlawing of typing SMS text messages...