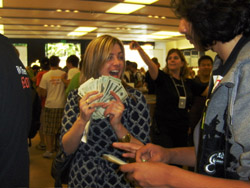 Last time we checked we were still in America. But, apparently, once you step inside an Apple Store, you’re on Steve Jobs’ turf – and subject to his rules. In an effort to curb the seemingly rampant sales of unlocked iPhones through, say, eBay

, Stevie has limited iPhone sales to 2 per person!

Just how does Apple intend to enforce this ruling? Well, in his infinite wisdom, Stevie has decreed that iPhones will henceforth only be sold to plastic customers – if you want an iPhone, you’d better warm up your credit or debit card, no cash will be accepted. Don’t have any plastic? You might be SOL.

You see, Apple has estimated that fully 250,000 of the 1.4 million iPhones sold thus far were summarily unlocked and sold for use outside of AT&T’s network. And, with Apple speculated to be making a couple hundred dollars per iPhone per year from their revenue sharing deal with AT&T, 250,000 unlocked iPhones represents millions in lost revenue. Apple only gets the kickback from iPhones using AT&T’s network – unlocked iPhones on other networks are outside the scope of that deal and essentially take money put of Apple’s healthy coffers.

So, if you’re planning on buying all your friends and loved ones an iPhone this holiday shopping season, you’d better distribute your iPhone allotment across multiple cards. Pre-paid debit cards anyone?