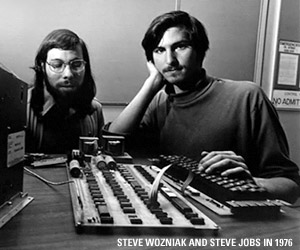 “Woz” as people like to call him recently sat down with laptop magazine. He gave straight, pure, unedited thoughts about the iPhone that just might shock those people who think a black turtle neck and jeans is what Jesus would be wearing today if he was alive:

Laptop Magazine: Is there anything you would change about the iPhone?
Woz: I think it could be more like a computer. It should be open like a computer. Anyone should be able to develop their own games and programs on it. And keep the phone and the phone services off guard so it’s protected.

Laptop Magazine: So you’re in favor of the unlocking and jailbreaking for third-party applications?
Woz: From a business point of view, Apple owns what they have done. They have a right to lock it. But I am really for the unlockers, the rebels trying to make it free. I’d really like it to be open to new applications. I’d like to install some nice games. Why in the world can I not install a ringtone that I’ve made? How would that hurt AT&T’s network? Here is Steve Jobs sending letters to the record companies saying [they] should provide music that’s unprotected, but here he is taking the opposite approach with the iPhone. I don’t know to what extent AT&T is involved in the thinking and direction.

Laptop Magazine: Does carrying one phone cut it for you?
Woz: I really like to be a technology buff and offer advice to people on devices and be in the know. I’m enamored with different features in different phones. For some of the phones it’s the style that I like, for example, Bang & Olufsen’s device. The iPhone is just a “got to have” because everyone knows what it is. I like my little BlackBerry Pearl because I like the size for what it does. It’s a creditable smart phone but not very pleasing for Internet surfing. I like my RAZR because it has better voice quality than the iPhone; it’s a bit louder. Someday I will switch to the iPhone for voice.

Check out the whole thing and maybe you too will reach the conclusion that the wrong Steve is in power.