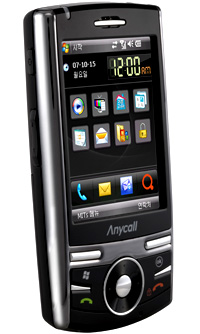 It’s not like Samsung doesn’t have a single touchscreen enabled device on the market — it’s that their upcoming M4650 model clearly resembles the iPhone. Their idea is simple – they want to introduce the iPhone-like device in Korea before Apple does.

Apparently, the upcoming “multi-touch phone” will be hitting Samsung’s domestic market via LG Telecom. It will be smaller than the iPhone, sporting 2.8″ LCD display with haptic feedback, but also the T-DMB receiver for watching mobile TV. The phone is running on top of Marvel 624MHz PXA300 CPU and Windows Mobile 6.

The first image looks promising and yes, we would like to see this baby hitting the western hemisphere as well. Just please don’t make it another Vodafone exclusive like you’ve already did with the F700…