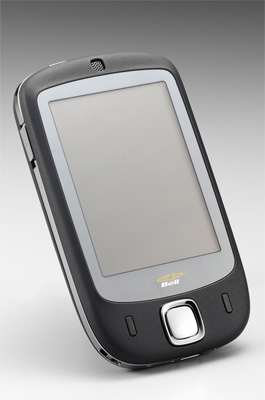 Word has it that Canada’s CDMA carrier, Bell, is eyeing the HTC Touch (well, it’s actually the HTC Vogue) as the newest Windows Mobile 6.0 smartphone for its Canadian subscriber-base. Bell may be looking to bring the TouchFLO device to Canada in mid-November for $249 with 3-year contract, $299 on a 2-year, $399 for 1-year, or $449 free and clear. That 3-year contract price is pretty enticing, but we have problems committing for a single year, it’d be hell being locked down for three.

Anyway, what’s even more interesting that the HTC Touch hitting Bell’s network is the speculation that Bell will be classifying the Windows Mobile 6.0 Professional-powered HTC Touch as a phone rather than a PDA. This may mean that Bell will be offering unlimited data plans for just $7 per month. That’s single-digit territory for your fill of wireless data. Of course, the “unlimited” definition is bound to have some restrictions, but for $7, you really can’t argue. And, considering Canadian carriers’ penchant for outrageous data rates, this $7 unlimited data plan could flip the Canadian wireless data market on its head.

For all our Canadian friends’ sakes, we hope Bell comes through with both the HTC Touch (HTC Vogue) and this incredible $7 per month unlimited data plan.

Sprint’s Centro commercial: Ever wish there were more of you?

Sprint is airing the new commercial for the Palm Centro emphasizing the device's multi-tasking capability. "You can email, chat, text......