Well, the cat’s officially out of the bag, tied down, and committed at this point. Bell Canada has just officially announced that they will indeed be bringing the HTC Touch (well, actually it’s the CDMA version – the HTC Vogue) to their Canadian subscriber base later this month. But the big news here is that Bell has committed to offering the HTC Touch with that rumored $7 per month unlimited data plan. Pricing for the Bell HTC Touch is set at $150 with 3-year contract, $200 with 2-years of servitude, $350 for a single year of contract woes, or $400 free and clear of Bell’s contract grips. You’ll find the $7 unlimited data plan under the “Features” section of the purchase process – it’s called “$7 Unlimited Mobile browser.” 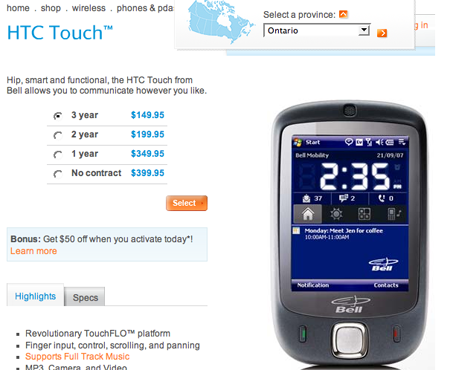 We mentioned that if Bell were to actually go through with this and commit to a $7 per month unlimited data plan, they could very well change the data-pricing landscape in Canada. For our Canadian friends’ sakes, we sure hope other carriers will be feeling enough heat to actually start charging sensible data rates. Way to shake up data rates in Canada, Bell!

Are you tired of hearing about the Nokia N82 yet? No? We thought not. As Stefan pointed out, the Nokia...